It’s well-documented that Gen Z (born between mid-to-late 1990s and early 2010s) has much higher expectations for companies to take a stand on social issues. In a recent APCO survey of 2,005 U.S. adults, 88% of Gen Z (ages 18-25) agree that companies have a role to play in addressing the major challenges facing society. Millennials, Gen X and Baby Boomers on the whole agree as well, but to a slightly lesser extent—77%, 81% and 73%, respectively.

However, weighing in on the social and political issues of the day is much easier said than done when there is increasingly sharp political division among Americans on the role of companies.

With pressure emanating from all sides, how can corporations live up to the expectations of Gen Z while also balancing the beliefs and attitudes of others? APCO’s survey answered key questions to guide corporate leaders.

How is Gen Z different from older Americans in their expectations for brands?

Gen Z is driven deeply by their care for others and the world around them, and this passion for others translates into their expectations for companies. APCO’s survey found that 80% of Gen Z believe that a company should speak out, take action or advocate on current events and issues if it’s important to employees, customers, or relates to their business. In contrast, feelings are less strong among Millennials (70%), Gen X (62%) and Baby Boomers (57%). Further, a strong majority (80%) of Gen Z are supportive of CEOs speaking out on issues if it is connected to their business or reflects the beliefs of employees or consumers, with slightly fewer Millennials (60%), Gen X (58%) and Baby Boomers (58%) also agreeing.

On what issues do Gen Z most expect companies to take a stand on?

Gen Z are pushing for change on societal issues; they want more action and expect brands to play a part. According to APCO’s study, there is near universal agreement among Gen Z that it is OK for companies to take a stand on mental health (90%) and access to health care (88%).  On social issues such as gender equality (84%), income inequality (83%), racial equity (83%) and voting rights (81%), there is a strong expectation from Gen Z for companies to do something. However, this audience is slightly more on the fence—only 57% say it is OK for companies to take a stand—on the most controversial and divisive issues, such as abortion. 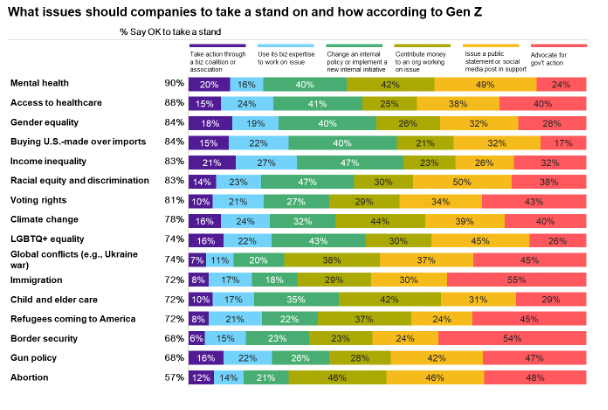 How can corporations live up to Gen Z’s expectations?

Further, our survey drilled into the best way for companies to take a stand across a set of 16 issues and current events. For many of these social issues, Gen Z leans more towards taking action by changing internal policy or issuing a public statement or social media post. This preference for action and talk is in contrast to older Americans who tend to prefer action only—and preferably internal action.

What does this mean for brands?

What these results point to is a generation that seeks brands that are aligned with their values. Brands that get it right among this generation will be those that authentically act and speak to their efforts—not just offer lip service to an issue. Commitments that start at home, through a change to internal policy, resonate with this younger cohort but can also help brands to “win” with older Americans as well. 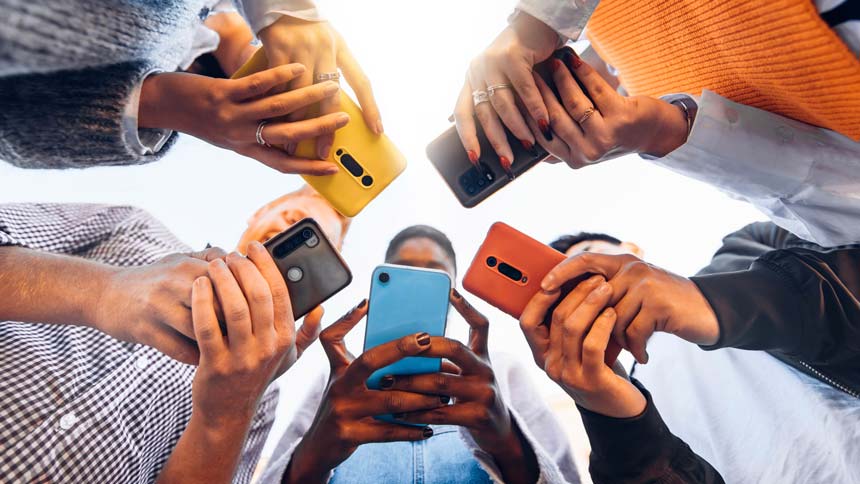