Washington – October 12, 2022: Despite the highly charged political environment in Washington, D.C., policy leaders believe trade associations have been effective advocates in 2022 for their members and industries, particularly those representing the health care, manufacturing and technology sectors. These industries faced lofty expectations and political scrutiny this year, but their representatives are perceived to be getting results, according to an APCO Worldwide survey of policy leaders in Washington released today.

Respondents to the TradeMarks study believe health care, manufacturing and technology associations have succeeded by putting more of an emphasis on protecting the reputation of their industry and relationship-focused characteristics like multilateral impact, membership mobilization and unified voice.

“This year’s findings show an interesting turnaround story for manufacturing associations, one of the key sectors involved in the passage of the Bipartisan Infrastructure Law. The technology sector also stands to gain in this new law’s investments and the Chips and Science Act, while some in the sector face scrutiny over privacy and dominance issues,” said Bill Dalbec, the study’s principal investigator and managing director for APCO Insight, the global research, analytics and measurement consultancy at APCO. “The results demonstrate the importance of engaging to advance and protect the industry they represent and why laying the groundwork now, even with the fate of Congress still to be determined, is crucial for associations to be prepared for the lame duck and new Congress.”

Previous TradeMarks studies have shown the second year of a Congress is a time for action for associations, activating relationships—lobbying—built during the first year. The 2022 study confirms that policy leaders expect the most effective associations to have strong direct relationships with policymakers and effective lobbying representation. Manufacturing and financial services associations are rated as particularly strong on the lobbying characteristic.

In addition to these findings, APCO’s TradeMarks study reveals the importance of being viewed favorably and able to collaborate effectively with policymakers from across the political spectrum.

“The slim Democratic control of both houses of Congress, tension within the Democratic and Republican caucuses, and somewhat differing priorities between the White House, House of Representatives and Senate has made it even more important for associations to have strong bipartisan relationships and allies,” said Licy Do Canto, managing director of APCO’s Washington, D.C., office. “Moreover, the looming mid-term election and strong sentiment that we will have divided control of the congress places a premium on nurturing these types of relationships and bringing this foresight to one’s work for their industry.”

Collectively, the 50 trade associations assessed by policy leaders recorded the second highest aggregate TradeMarks Index—APCO’s policy effectiveness score—since the survey began in 2013. The 2022 aggregate TMI of 68.1 (on a 0-100 scale) is a 1.5-point decline from the all-time high of 69.6 measured in 2021.

This year, nine different associations were identified as top performers, including two each from the health care, technology and manufacturing sectors. The top-ranked association for each characteristic is listed below. 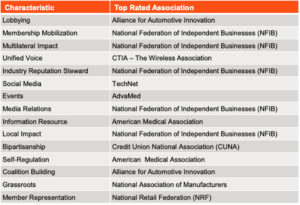 For more information about the TradeMarks study, visit trademarks.apcoworldwide.com.