Key results from the study are available here.

The study surveyed 305 policy leaders in Washington – congressional staff, executive branch officials and private sector executives – to identify what makes an association an effective public policy advocate in the eyes of its key stakeholders.

“This year’s study reinforces the importance of developing both wide-ranging and deep relationships throughout Washington. Effective associations build and maintain relationships across the legislative, executive and regulatory regimes for representation and advocacy efforts, even in this currently very challenging environment,” said Bill Dalbec, the study’s principal investigator and deputy managing director for APCO Insight, the opinion research consultancy at APCO Worldwide. “With a new administration, all Republican Congress and divisions emerging within each chamber and political party, it is particularly critical to develop one’s relationships as broadly as possible.”

The study’s findings demonstrate the continued debate over the future of the Affordable Care Act likely played into perceptions. For the third time in four studies, the health care sector associations collectively and individually sit at the top of the heap in terms of perceived effectiveness in delivering policy results for their members. 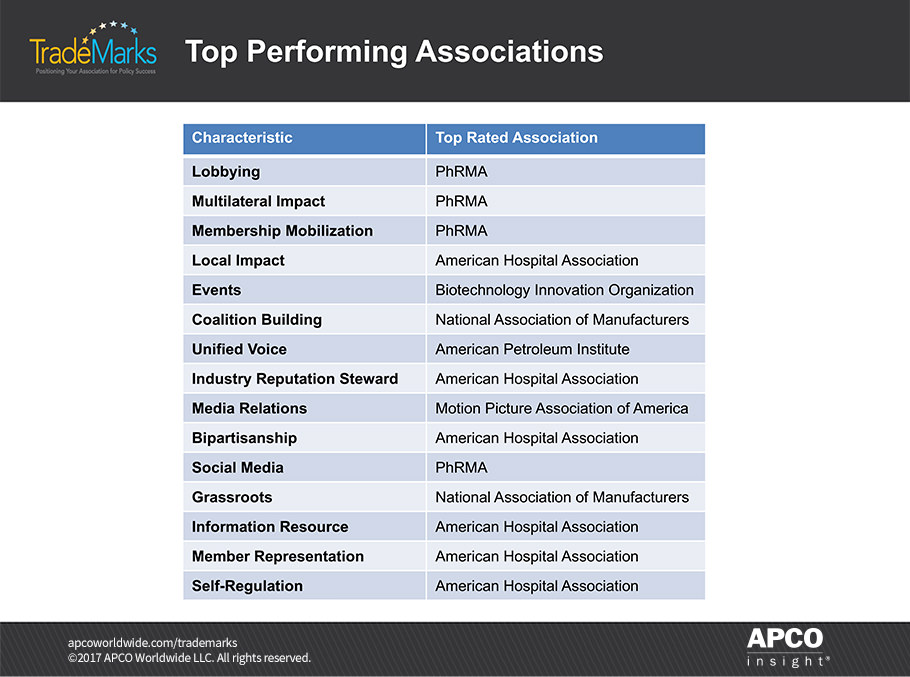 Consistent with these findings, APCO’s TradeMarks Study reveals the importance of taking a stand and using one’s political capital to drive the dialogue on critical issues.

“Washington has undergone a seismic transformation over the past year, but the lessons learned by associations should be applied by anyone looking to shape policy or change the conversation,” said Evan Kraus, global president and managing director of APCO’s Washington office. “It’s not going to get any easier to influence Washington in the next few years; taking the right approach is going to mean the difference between being heard or being left out.”

APCO’s research also found that given the gridlock and ineffectiveness of D.C., associations that are having success at the state and local level are getting credit for those efforts in D.C.

“Given the division in Washington, the importance of having an impact at the local level has risen significantly compared to 2016,” said Gadi Dechter, senior director and head of APCO’s Washington-based public affairs practice. “Associations that are effectively connecting at the state and local levels are more likely to be perceived as strong at the federal level as well.”

For more information about the TradeMarks Study, please visit here.