Washington – October 8, 2019: Despite facing an uncertain policy landscape, trade associations remain as highly-regarded policy advocates and are performing at the highest level measured in terms of public policy effectiveness for their members, according to an APCO Worldwide survey of policy leaders in Washington, released today.

There is, however, an urgent need for associations to use social media and other digital communication more effectively to engage with policy influencers, the survey found. The key results were released as a part of the sixth iteration of APCO’s annual TradeMarks study, which measures the influence and efficacy of advocacy associations in Washington.

“With an increasingly divided Congress, it is more important than ever before for trade associations and other advocacy organizations to be agile and evaluate their relationships,” said Bill Dalbec, the study’s principal investigator and managing director of APCO Insight, the full-service global opinion research group at APCO Worldwide. “Our survey results show associations have adapted to be effective advocates for their members by not only focusing on broadening their relationships and adjusting strategy and tactics to reflect the current political landscape, but also by being prepared to move quickly when issues affecting their members arise.”

Previous TradeMarks studies have shown that the first year of a Congress is the ideal time for trade associations to identify and build relationships with key players for their industry in the legislature. However, the new House Democratic majority has forced trade associations to engage more quickly and take advantage of shifts in policies that pit the White House against Congress, in hopes of achieving their agendas while maintaining their relationship building efforts.

This year, six different associations were identified as top performers. The top-ranked association for each characteristic is listed below: 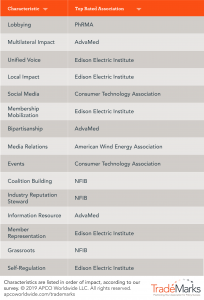 Collectively, the 50 trade associations assessed by policy leaders recorded the highest aggregate TradeMarks Index—APCO’s policy effectiveness score—since the survey began in 2013. The 2019 aggregate 66.3 (on a 0-100 scale) is 1.3 points higher than last year’s 65.0 and 1.1 points higher than the previous high of 65.2 recorded in 2015.

“It appears trade associations are adapting to the Trump Administration and the need to be agile in the face of uncertainty surrounding presidential policy initiatives and how a divided Congress will react,” said Gadi Dechter, senior director and head of APCO’s Washington-based Public Affairs Practice. “The results show associations are appropriately focused on what matters—building and leveraging relationships, representing all interests in their industry, and mobilizing members to engage with government officials and their staff. We also see a renewed focus on working with both sides of the aisle to build support for initiatives.”

“As a whole, associations have yet to figure out how to effectively use social media to engage and communicate with policy influencers,” said Rachael Siefert, senior director and head of APCO’s North America Digital Strategy Practice. “Advocacy is not limited to achieving policy outcomes; instead, associations should think about its digital programs as a way to reach and engage stakeholders inside and outside the organization—it’s about building a movement to educate, engage and mobilize diverse audiences around an issue.”

For more information about the TradeMarks study, visit /work/proprietary-tools/trademarks/. 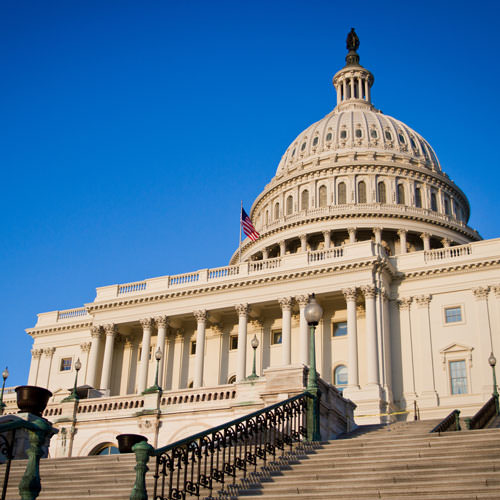