Second only to “blue sky thinking,” “thought leadership” may be the most irritating and overused corporate phrase.

What does thought leadership mean? Is it more than just jargon? Can it ever make a positive contribution? These were some of the questions I was interested in exploring at the European Digital Advocacy Summit in Brussels.

The Cambridge Dictionary describes a thought leader as “an expert on a particular subject whose ideas and opinions influence other people, especially in business.” While a helpful starting point, this definition doesn’t address the way in which many professionals use it. For many clients, thought leadership is an end in itself, with little thought – excuse the pun – to the actual “thought” behind the leadership.

Daniel Drezner, a political scholar, provides a more interesting take on this subject in his book, The Ideas Industry: How Pessimists, Partisans, and Plutocrats are Transforming the Marketplace of Ideas. According to Drezner, “Thought leaders develop their own singular lens to explain the world, and then proselytize that worldview to anyone within earshot.” For Drezner, the age of the public intellectual has been usurped by that of the thought leader. Public intellectuals who are highly analytical – such as the philosopher Martha Nussbaum – can be contrasted with a new class of thought leaders like Thomas Friedman and Sheryl Sandberg whom Drezner deems “intellectual evangelists.”

If we accept Drezner’s definition, then Trump is arguably an effective thought leader, albeit not necessarily a “good” one, in the moral sense of the word.

Does this then render thought leadership a shallow or meaningless endeavor?

I would argue no. When done right, thought leadership has the potential to be interesting, admirable, and can even change the world for the better.

One example of a good thought leader is Hamdi Ulukaya, the Turkish-Kurdish-American entrepreneur and founder/CEO of the Chobani yogurt company.

In 2015, APCO helped Hamdi launch the Tent Foundation* to help come up with new solutions for “hacking” the refugee problem. Launched at Davos, the focus of this platform was to encourage the private sector and entrepreneurs to provide innovative solutions to help solve the refugee crisis.

What can we learn from this example?

Hamdi Ulukaya’s platform had a number of qualities which I believe make it a good example of successful thought leadership.

If good thought leadership can exist, then why is it so hard to come by?

For thought leadership to resonate and make a difference from an advocacy perspective, it should advocate for something more than the individual. This is especially true in a societal context in which public trust and political moral authority are at historic lows.

Like corporate advocacy, good thought leadership should be good for society, not just good for business. 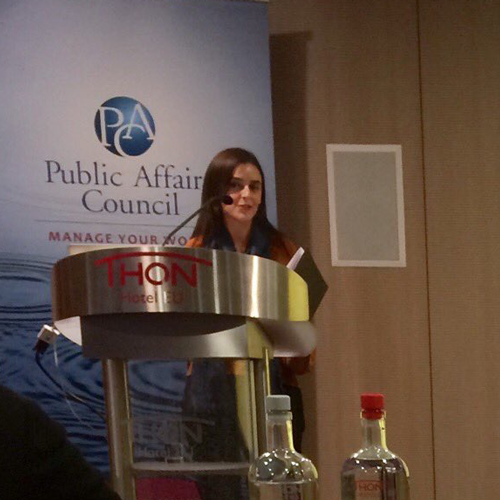