Since Israel’s founding in 1948, the international community has disputed the designation of its capital as Jerusalem, arguing that the city’s final status should only be decided by negotiations between Israel and its neighbors. This international consensus has been reflected in the decisions of all countries to place their Israel embassies in Tel Aviv, rather than Jerusalem. Furthermore, there has been resistance to note the western parts of Jerusalem controlled by Israel since 1948 on official documents, and judicial rulings in favor of the U.S. State Department’s decision to list Jerusalem-born American citizens’ place of birth simply as “Jerusalem,” without designating a country.

The international community further disputes Israeli control of Arab-majority East Jerusalem since 1967, having refused to recognize Israeli annexation and insistence on an undivided city. In parallel, the Palestinian Authority (PA) claims this part of the city as the future capital of an independent Palestinian state. The city’s sacred place in the three Abrahamic faiths has added additional religious and emotional elements to the issue – especially over the status of the contested Temple Mount/Al-Aqsa Mosque compound – and has generated scrutiny from Arab and Muslim countries over any perceived changes to a delicate status quo.

In 1995, the United States Congress – traditionally known to hold stronger pro-Israel sentiment than the Executive Branch and State Department – passed the Jerusalem Embassy Act, calling for the country to move its Israel embassy to Jerusalem and officially recognize the city as Israel’s capital. The legislation has consistently been vetoed by U.S. presidents, who have signed a presidential waiver once every six months, arguing that such a unilateral move could harm United States national security and prejudice the outcome of Israeli-Palestinian negotiations.

While other presidents also advocated for an embassy move in their election campaign, President Donald Trump’s perception as an unconventional figure, and his initial appointments of pro-Israel officials to his administration for Middle East affairs, led many observers to suggest he would alter the American policy on Jerusalem. Other early signs included the use of the label “Jerusalem, Israel” on some official White House social media platforms, and the president’s visit to the Western Wall in Jerusalem’s Old City – which is considered to be East Jerusalem by the international community – in his May 2017 trip (the first by a sitting U.S. president) and accompaniment by an Israeli state-appointed rabbi suggested a recognition of Israeli sovereignty at the contested site.

It should be noted that in practice most countries have acknowledged Israeli control of the western part of the city, to a certain extent. Foreign political and business delegations regularly meet with Israeli counterparts at government institutions located in West Jerusalem, while newly-arrived diplomats present their credentials at the President’s Residence in Jerusalem. Additionally, some countries maintain consulates in West Jerusalem that service Israeli citizens, including the United States. In April 2017, the Russian Foreign Ministry stated that it viewed “West Jerusalem as the capital of Israel,” making it the first country to express such a policy (though it also clarified support for East Jerusalem as the capital of a future Palestinian state).

In a significant departure to all of the above, President Trump’s address on December 6, confirmed that the United States now recognizes Jerusalem as the Israeli capital. The president called on the State Department to develop a timetable for moving the embassy to the city. Crucially, the president balanced this perceived pro-Israel tilt by not endorsing Israeli control of East Jerusalem specifically, stating that the city’s final status and borders can only be determined by negotiations between the sides. The president reportedly conveyed these intentions in phone calls to PA President Mahmoud Abbas and other Arab leaders ahead of his announcement.

Prior to, and immediately following, President Trump’s address, Palestinian President Mahmoud Abbas and regional Arab leaders have unanimously warned him of dangerous implications from the changes in U.S. policy on Jerusalem, including the potential for violence and irreparable damage to Israeli-Palestinian peace talks. These critics include the heads of Arab states who had strongly embraced President Trump’s initial Middle East policies and have recently been cooperating with Israel in unprecedentedly close fashion, including Egypt’s President Abdel Fattah al-Sisi, Jordan’s King Abdullah II, and the Saudi government. Immediately following the speech, the only significant reaction from the PA was that of chief negotiator Saeb Erekat who said the United States had voided its ability to act as a player in the peace process.

Other opposition has been expressed in more dramatic tones, and suggested the move could exacerbate tensions along religious lines. Hamas and other Palestinian groups have called for “three days of rage” and promised a new intifada with Ismail Haniyeh, Hamas’ leader in Gaza saying the United States had “opened the gates of Hell.” Turkish President Recep Tayyip Erdogan cautioned that Jerusalem was “a red line” for all Muslims and has called for an emergency summit of Islamic countries next week, while warning that the embassy move could lead Turkey to sever diplomatic ties with Israel. On social media, newly-trending hashtags in Arabic and English have appeared stressing Jerusalem’s Islamic and Arab character and conveying firm opposition to the changes in U.S. policy. Several hours before the speech, hundreds of Palestinians in the Gaza Strip representing different factions gathered to protest the expected policy changes, burning U.S. and Israeli flags and chanting that Jerusalem is the Palestinians’ “eternal capital.”

European powers have also criticized President Trump’s approach and urged a reconsideration, with leaders of the UK, Germany, and France cautioning on its potential to harm a political process between Israel and the Palestinians. The European Union’s chief diplomat Federica Mogherini urged negotiations as the only means for solving the status of Jerusalem, a position mirrored by the UN in recent statements from UN Secretary General Antonio Guterres. Unusually, Pope Francis also voiced concern, calling for the status quo in the city to be maintained. In contrast, Eastern and Central European countries have either refrained from commenting or expressed an indication of following President Trump’s lead. The Czech Republic announced its recognition of Western Jerusalem as Israel’s capital, while Hungary vetoed a joint EU statement that would oppose the new American policy and according to Israeli sources is expected to also recognize Jerusalem as Israel’s capital.

Though unconfirmed by Israeli sources, foreign media reported this morning that the United States had requested the Israeli authorities moderate their “celebration” of the announcement – giving significant weight to the theory that the recognition of Jerusalem was a test by the White House to see if the region could absorb such high-tension events without erupting into violence, as a precursor to much more significant developments to come. It is notable that U.S. Vice President Mike Pence will visit Israel and the PA from December 17-19, during which he is expected to present the Trump Administration’s peace plan for the broader Middle East.

While the speech may have generated initial tensions, in the absence of any sustained wave of violence the business climate in Israel and the West Bank is unlikely to be significantly harmed. In anticipation of any outbreaks of violence, the Israeli border police and military have been placed on high alert and bolstered deployments in the West Bank.

Overall, in recent years, several small and medium-scale conflicts between Israel and its neighbors, including some which lasted more than one month (the 2006 Lebanon War and the 2014 summer conflict with Hamas in Gaza), did not observably hamper the business environment or slow down international investment in Israel or the Palestinian Territories in the West Bank. While the tourism industry suffered, the Israeli economy, and its tech industry has demonstrated resilience during periods of violence, and has continued to attract sizable investment – including new and expanded presences of hundreds of MNCs – despite security threats and perceived existential challenges.

A non-impact of President Trump’s address on business activity would serve to highlight the growing separation between the political-security and business realms in Israel and the Palestinian Territories. Moreover, an eventual move of the U.S. embassy to Jerusalem could encourage other countries to follow suit, generating momentum for new business activity for servicing the expanded diplomatic community. More broadly, wider foreign recognition of Israeli West Jerusalem could enhance the city’s image as an attractive business destination, which has recently enjoyed branding as growing tech hub and future global center for autonomous vehicle technologies following Intel’s USD 15 billion purchase of Jerusalem-based Mobileye by Intel in March 2017.

Nevertheless, the revision of longstanding American policy has the potential to adversely affect the region from political and security standpoints: 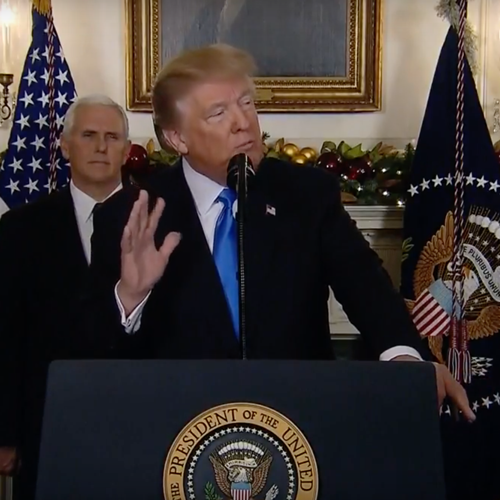