The View from Washington

Trump’s withdrawal from the Paris Climate Agreement, while clearly significant, did not come as a surprise, as quickly acting upon campaign pledges has been a top priority for the administration. However, the withdrawal comes amid battles on whether or not to withdraw from the Paris Agreement, both between policymakers on the Hill as well as between members of the administration itself.

Early reactions to the announcement have been mixed. While vocal proponents for U.S. withdrawal include White House chief advisor Steve Bannon and EPA head Steve Pruitt, a number of players in the administration who advocated to remain in the agreement suffered a defeat today. These include Secretary of State Rex Tillerson, Secretary of Energy Rick Perry, Secretary of Defense James Mattis and Trump’s own family members Ivanka Trump and Jared Kushner.

The withdrawal also goes against the wishes of major business interests, including giant oil companies that have been vocal supporters of the agreement. Tesla CEO Elon Musk previously threatened that, should Trump withdraw from the agreement, he would withdraw from his role as White House business advisor. Senator Lindsey Graham (R-SC) stated that leaving the agreement would be “bad for the country.” On the other hand, supporters of the withdrawal include Senator Ted Cruz (R-TX), who wrote previously that leaving the agreement would “relieve our nation of the unfair and economically devastating requirements of the Paris Agreement.”

At present, there are many unknowns about the practical implications of the withdrawal. Three questions to monitor moving forward now are: 1) What is the actual timeline for U.S. withdrawal, 2) Does the U.S. withdrawal negatively impact its relationship will key allies and international companies (and if so how), and 3) Do other countries begin to follow the example of the United States and withdraw as well?

The View from China

In China, there is no longer any debate about the need for action on carbon emissions and the adherence to the Paris Climate Agreement. The government is serious about the issue, which was reflected in a May report which found that China is likely to over-achieve its carbon-reduction targets and in less time.

The Chinese government has been investing heavily behind renewable energy sources, particularly solar, wind and hydro and the country’s coal consumption has declined over the past three years. China’s embrace of Paris was not born out of altruism; rather it sees both long-term economic advantages from investing in climate-friendly action, and its citizens and government witness daily the evidence of pollution and climate change in the air they breathe, the soil they farm, and the more extreme climate they endure.

By taking action China is creating a new market for leapfrog technologies and cultivating new industries—for electric vehicles, solar power and bike sharing, for example. Each is fostering a new generation of “clean” companies, some of which will use China as their incubator and doubtless become go on to capture the U.S. market over time.

The View from the Middle East

Trump’s decision to withdraw from the Paris Agreement comes less than two weeks after leaders of the Middle East welcomed the president to Saudi Arabia and Israel with nothing shy of pomp and circumstance. While leaders from the Sunni Arab world and Israel’s Prime Minister had grown weary and disenchanted with Obama and greeted Trump with open arms, the president’s newest allies will not embrace his decision to ditch the monumental agreement.

While the State of Israel regards the United States as its closest ally and Trump as its biggest cheerleader in the international arena, the country will not emulate their main supporter and follow suit. In response to Trump’s Thursday declaration, Israel’s Environmental Protection Minister Ze’ev Elkin stated, “We are not an American colony…the working assumption that Israel needs to change something in its conduct because the U.S. president has decided to resign is wrong. We will continue to hold our part (of the bargain) and the government decisions that were made.” These comments echo the remarks of Israel’s Energy Minister, Yuval Steinitz, just hours before Trump’s statement. Minister Steinitz affirmed the State’s unwavering commitment to the Paris Agreement stating, “I declare that my commitment to reducing the use of polluting coal and replacing it with natural gas has not changed, regardless of the decision of the U.S. president.” Minister Steinitz called the 2015 agreement a “rare case in which the world united out of concern for the health for future generations. It is very import that – even if changes are made – that this historic initiative not fail.” For Israel, the ratification of the climate agreement has already unlocked new avenues for export and technological developments.

To the east of Israel, Trump’s new-found friends are set on a course to transition from oil-driven economies to knowledge-driven economies. For the United Arab Emirates and Saudi Arabia, investment in renewable energy and clean technologies is a key component to this transition. President Trump’s decision to withdraw from the Paris Agreement will not deter the world’s top oil exporters from diversifying their energy mix.

The Kingdom of Saudi Arabia is well underway with restructuring its energy sector as part of its Vision 2030. Regardless of Trump’s withdrawal from the agreement, renewable energy projects will remain as a pillar of the country’s transformation. This year, Saudi Arabia kicked off a $50 billion renewable energy-push and is set to develop 30 solar and wind projects by 2023 to catalyze economic growth, help develop the private sector, create thousands of jobs, boost its electricity generation, and cut crude oil burning.

The United Arab Emirates, home to the world’s first sustainable city and the International Renewable Energy Agency (IRENA) headquarters, will continue its efforts to reduce its use of fossil fuels. The country, which ranks high in per capita CO2 emissions, this year stated that it intends to invest $163 billion in projects to generate half of the nation’s power needs from renewable sources. The emirates of Dubai and Abu Dhabi are leading this push. The recently announced Dubai Clean Energy Strategy 2050 plan places renewables at the core of Dubai’s future energy mix and the construction of what will be the world’s largest independent solar plant is underway in Abu Dhabi. Trump’s declaration will not impact the country’s commitment to the agreement nor its desire to balance economic needs against environmental objectives.

The View from Brussels

In Brussels, the EU capital that Trump once referred to as a hellhole, the president’s decision to ditch the Paris climate agreement is met with outcry, but also with determination. Miguel Arias Cañete, the European Commissioner for Energy and Climate, tweeted in reaction to the first rumours that “The world can count on Europe to keep global climate leadership” and that “We all see the #ParisAgreement as the growth engine of our economies, the key to protect our planet. We are on the right side of history”. Meanwhile, the leaders of the three EU institutions: European Parliament President Antonio Tajani, European Commission President Claude Juncker and European Council President Donald Tusk, representing the EU Member States, all spoke out against the decision, with the latter two appealing to Trump, asking him to rethink his decision. Once a done deal, the reactions were mainly around the need for the EU to now further step up its engagement.

Like in China, the discussion about the need for action on climate change is over in the sense that ‘Energy union and climate’, with the subtitle of ‘Making energy more secure, affordable and sustainable’ is one of the 10 key priorities of the 2014-2019 Juncker Commission

The question now is how to go about it, and at what ambition level. That fight is very much taking place right now, with several legislative files on energy market design, renewables and energy efficiency on the table – all part of the Clean Energy for all Europeans package that was issued in November 2016. The final outcome of these pieces of legislation, alongside the much-maligned recast of the EU Emissions Trading System (EU ETS) which is finally nearing completion, will together determine to which extent the EU simply talks the talk or also walks the walk.

That will depend on EU member states, of course, but also on the ambition levels of others around the globe. While the EU narrative is all about leading the clean energy transition to fully unleash the potential of green economy jobs and growth, not all  in Europe are fully on board, arguing that too high an ambition level (i.e. too high demands placed on industry) would make (certain) European businesses less competitive and thus lead to unfair market conditions and job loss – much like Trump’s line of argument for the United States. Therefore, it is important that Europe goes first – but also that the rest of the world follows.

That is also why the announcement that the EU and China will commit to forging closer diplomatic ties to fill the leadership void left by the U.S. climate U-turn matters. This is the first time the two sides are expected to come out with a separate joint leaders’ statement focusing entirely on climate change and clean energy, and they announced it as soon as the news regarding the United States broke. Having the United States on board would be powerful indeed. But the EU and China are clearly signaling they can also go it alone – and take others with them. As Miguel Arias Cañete said in his first tweet post-confirmation: “Today’s announcement has galvanised us rather than weakened us, and this vacuum will be filled by new broad committed leadership.” 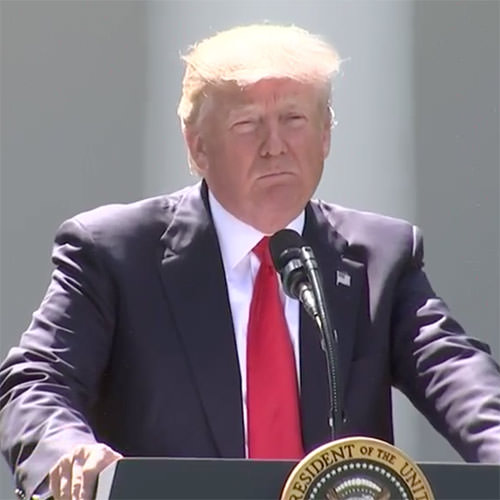