For over fifty years, international policy makers, influencers and corporate leaders have gathered at the annual Munich Security Conference to discuss rising security threats and global challenges. Meeting only weeks after the conclusion of Davos, the MSC provides an opportunity for the continuation of those discussions and the crafting of long lasting and sustainable responses to a growing array of global challenges.

Munich continues the trend of vital modern partnerships, of active and encouraged engagement, between governments and non-government groups to develop and shape wholistic and durable solutions to world-wide issues. The MSC is a perfect example of this nexus of expertise and policy influence between politics, academics, and corporates. Global security challenges no longer relate solely to peace and disarmament but to better functioning of international institutions; more effective development policies; tackling climate change; addressing cyber security challenges and regulating cyberspace; and recognising the societal impact of technology and social media.

These challenges require action from more than just government officials, and in a time of faltering political leadership, the global public increasingly looks to corporates and non-government groups to provide moral and societal leadership and, critically, engagement in creating these global solutions.

In our online and hyper-connected world, opinions are shaped, changed, and even made redundant quicker than before. Reputations and perceptions of leadership are won and lost rapidly – the #MeToo movement, new leaders for the Paris Agreement, and environmentally friendly vehicle emissions are just a few areas which have seen evolving and changing perceptions of leadership. It is a high risk environment for any multinational. But that environment is quickly becoming one which cannot be ignored and the public have higher expectations of businesses. Corporations are looked up to for leadership and participation in finding solutions to modern problems.

Social movements and online protests are increasingly common, shining a light on the values and beliefs of each firm, and increasing the influence and importance of their own communications. Equality, harassment, diversity, immigration – all traditionally social issues where firms are now expected to lead the way. If the global stage has more influential actors than ever, it is not a stage corporates can avoid or be seen to avoid. That is why is it both wise and valuable for firms to pay closer attention to – and interpret the messages coming from – the MSC.

There was a time, the peak of globalization, when multinationals used to benefit from a relatively stable international order. It allowed for business and corporates to freely operate transnationally but also somewhat passively on the big issues of our time. Sitting on the sidelines was tolerated but the public has become more attentive to those who avoid taking ‘a line’ on flashpoint issues. While globalization is not dead, in the era of America First, Brexit, and rising populism, it has fundamentally altered its appearance. It has led to a weakening of leadership from political actors and a vacuum for corporates and non-government stakeholders to fill in the eyes of the media and the public.

Fittingly, ahead of the 2018 Conference, the MSC has released its annual report, “To the Brink – and Back?”, touching on these very challenges we face in a more unpredictable world Conversations in Munich will cover environmental policy, nuclear crises, regulatory changes in how we govern technology, and large-scale cross-border issues of migration and water security affecting hundreds of millions of people. The role for corporates will be how they best adjust to a new found, and possibly unwanted, role as leaders in a tumultuous world. The public increasingly demands their involvement – it’s unavoidable.

There is a role for corporate expertise and knowledge to play in shaping the responses to global challenges. Multinationals will have to find a way to become engaged in this fast moving and turbulent environment, making their voices heard, or they risk being left behind. 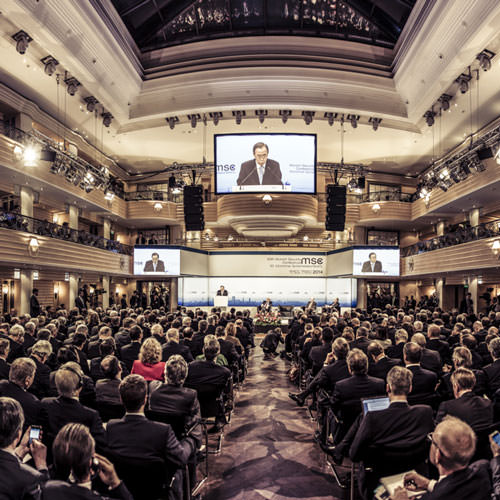