In this modern day world of divisive politics, tribalism seems to rule. It feels like this divisive attitude permeates all walks of life, except for one sector in particular. In the business sector we are seeing the opposite taking place, especially in the built environment. Office space design is opening up, becoming much more integrated and flexible. Workers are being given many options on how to do their work. Much more space is being dedicated to meet-up spaces where employees can gather informally to discuss projects instead of working in a more conventional office or conference room. There are two aspects of the office-built environment that are being revolutionized—spatial organization and technology.

The organization of space in the office environment is toward optimization and flexibility. This is accomplished using any number of architectural elements and designs including wall strip lights (to make workers appear more natural on the screen during video conferencing—not unlike stage lighting in theater productions), smart meeting rooms (with smart cameras and mics to track the interaction), window cloaking treatments (allowing for transparency and security for laptop users), private lounge chair work stations (providing comfortable work environments while still making workers accessible), hybrid cafés/garden spaces (for casual collaboration in indoor/outdoor environments), huddle rooms (equipped with video and digital whiteboards for three to four group collaboration as well as remote engagements), paired development spaces (similar to the huddle rooms only for two people plus remote workers), and standing desks (or treadmill desks promoting healthy posture and exercise while engaging in business discussions and activity).

Certain color coding (in a pleasant way) is used to make it easier to identify the various work areas described above, and the interior architecture is open and free flowing, filled with natural light to minimize stress and distractions that negatively impact productivity.

The architecture incorporates the latest technology, the conduit that connects employees with each other locally and remotely and with their clients and data. The technology can be as personal as wearables such as watches, glasses and other personal devices that can upload documents, monitor health, etc. Smart phones are already commonplace in the office environment, and smart whiteboards and video screens are also increasingly becoming more common. The cloud is opening access to communications through these technologies, which is offering previously unavailable and unimaginable data processing capabilities.

Augmented reality (AR) and virtual reality (VR) systems are also being developed that can transport participants via VR goggles or an AR 3D room with video walls to distant locations to view project sites or 3D presentations that would otherwise cost tens of thousands of dollars to visit.

The internet of things also includes collaboration and integration between audio visual communications devices, computers, laptops, tablets, interactive walls, the cloud, etc. Office space design is much more accessible. Buildings or entire cities are built in the virtual world using animated 4D video representation that ties cost, environmental assessment, carbon footprints and lifecycle costing to the objects in the animated representation. By first building the project in the VR, corrections and adjustments can be made in the computer before much more costly mistakes are made on the job site. This can save the owners up to 20 percent on the construction cost and up to 50 percent on the operational expense.

Architectural systems such as demountable walls, improved sound masking, modular data servers, raised access flooring and zero polluting data processing are becoming more commonplace. New data center technology allows for the servers to be integrated in the office environment by using individual cooling tanks in which data servers are submerged. The heat generated by the servers (digiwatts) is captured and used to heat and cool the office space. It is estimated that by 2030 data processing will consume over 30 percent of all electricity generated, as compared to the 5 percent it currently consumes. In addition to their energy consumption, today’s computer environments also require huge amounts of water. The new technology reduces the electrical requirement by nearly 90 percent and eliminates water consumption altogether.

Workers will also have the option of working in the office or at remote locations, including home, other offices or client sites. Even transportation will allow workers to maintain connectivity. Electric Autonomous Vehicles (EAVs) will transport workers between meeting and work sites within a metropolitan area before expanding to intercity destinations. EAVs will be connected to the company’s database through the cloud, enabling employees to continue working as they travel.

As the working environment improves, the comfort and well-being of the employees improve. Better communication and collaboration improve productivity. Recent studies clearly show that the next big thing in employee satisfaction and productivity is employee engagement. This is not measured in terms of counting interactions between colleagues, but rather in terms of measuring the relationships the employee has with the company, client/customer, company leadership, their team and their individual work. The employee’s life outside the office is certainly a part of this engagement model and influences the level and quality of engagement considerably.

There are many ways to measure employee engagement, but the physical environment plays an important, foundational role in encouraging it.

In this highly competitive world where much is at stake, companies need to create as advantageous a work environment as possible for their employees. The winners are going to be the better communicators and collaborators who are doing more with less, as Mies van der Rohe once said. If business can improve its functionality and profitability by working in this way, perhaps governments and politicians might benefit by changing the way they structure their offices and work spaces. It could have a positive effect on how governments operate, which could only be an improvement over what we see happening today. 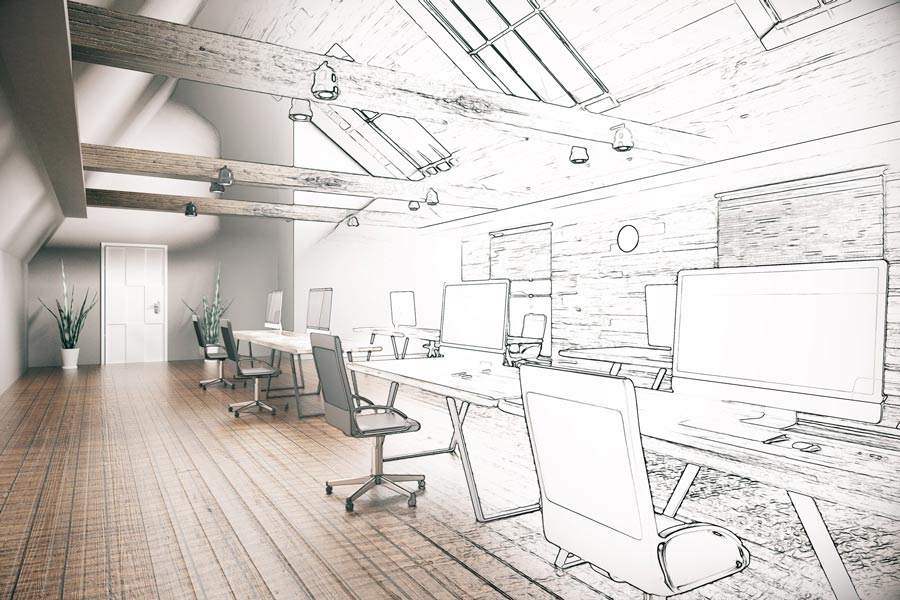