The next two days have been spent remembering times with a friend I had the honor to serve when he was Vice President of the United States.

The images from his decades of service and the calls with friends with whom I worked in the White House have focused mostly on the celebration of an extraordinary life.

One message from a friend suggested that George HW Bush had given us one last important gift in allowing us to all pause and reflect on how a true world leader really conducts himself.

Maybe the concentration of interest on a former President so respected will move us closer to the kinder and gentler nation he envisioned.

While it is natural to look more closely at the four years George HW Bush served as President, those of us who had a front row seat during the eight years he was Vice President learned much about the man.

It takes extraordinary discipline to move into the White House as one of only two people elected to work there and accept a role requiring total loyalty to the President. For George Bush this was especially true when you consider he and President Reagan were political opponents only months earlier. And, the challenge was all the greater for the time he had spent in public office where his own views on a wide range of issues had been forged.

However, challenging as it might have been, the commitment to loyalty was total.

He shared his views with the President in private.

He collected perspectives from Capitol Hill in direct conversation with Senators and Members of Congress from both parties who entrusted their concerns and insights to a Vice President who would find the right time and right way to share what was important with the President.

Similarly, I would witness during our travels together to over 60 countries, foreign leaders convey messages meant for President Reagan knowing that they could trust Vice President Bush to accurately and honestly share what he had learned without going through any staffing process.

While he did much more, the singular ability to serve the President as a confidant to leaders inside and outside of the United States contributed much during the Reagan/Bush Administration.

He also saw opportunities to advance our national interests. He took on drug issues and terrorism. He became the first senior official to meet some of the then-Soviet Union’s new leaders as leadership would transfer over a period of years.

When he believed a visit to Poland would help to strengthen Solidarity and a quest for greater freedom, he undertook a sensitive mission traveling to a country still in the grasp of the Soviet Union. Speaking to thousands from the balcony of a church remains one of my strongest memories from our extensive travel.

All during his second term as Vice President, the foreign travel continued as he was clearly the strongest and best ambassador President Reagan could have on the world stage. Trips to Europe, the Middle East and China were occasions to build on long term personal relationships.

When I joined as chief of staff in February of 1985, I knew that the Vice President and I would crisscross the country. The intention was to build support for the Administration’s initiatives, strengthen support for elected officials supporting the Administration and, of course, do it all in a way that laid the groundwork for a Presidential campaign.

We did travel to every state and went to most of them several times. Again, long time friends were always at the foot of Air Force Two stairs greeting their good friend, Vice President Bush.

His frequent complaint early on was that our motorcades were getting too long. We stopped using sedans for guests and started using mini-vans to keep the number of vehicles down, because he did not want to disappoint friends by telling them they couldn’t come out to the airport.

More than people now remember, we had tours of the country focused on technology and venture capital. We toured healthcare facilities. We met with leaders in law enforcement and learned first hand how challenging it was to be on the front line of dealing with crime.

Our travels put us in touch with local labor leaders who responded with great enthusiasm to the Vice President’s direct style and his commitment to economic growth bringing more jobs.

He was also there when tragedy struck. When a space shuttle launch went horribly wrong leading to the loss of the crew and a teacher who was onboard, Vice President Bush was soon on Air Force Two en route to Florida to meet with families and the NASA team.

Week after week, we were traveling the Nation and all this BEFORE an actual presidential election.

He knew America because he’d seen America up close. And, he knew the world because he traveled the world. Above all, at home and abroad George HW Bush built strong and lasting relationships. He did it because he enjoyed it. The outreach flowed from who he was and people could not miss the sincerity of his friendship.

George HW Bush dedicated most of his life to serving and bettering our country. As he leaves us, he does indeed give us one very important look at how strong, sensitive and personal leadership makes a difference.

May God bless you my good friend!

Watch a conversation my friend Tom Collamore and I had with Hill.tv this morning 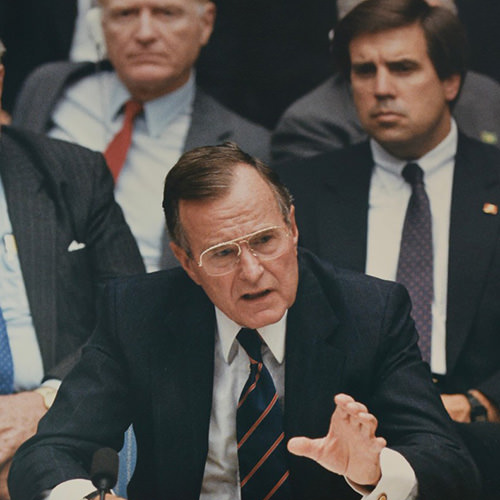