One’s identity is something they should own, and should cost nothing or very little.

Identity is not a concept of the 21st century, it’s something humans have talked about for thousands of years. Throughout history, the concept and the philosophy surrounding it have  often centered on individuality. Identity is one’s essence, the way they see themselves and want to be seen in society.

For too long and too many, one’s identity had to be hidden, was questioned, marginalized, unwelcomed, and often ridiculed by others.

Identity starts with the letter “i”—it is all about being your full self and showing people the truest version of yourself. As wholesome and positive as this sounds, this topic has not always been easy to navigate for some. Here are some of our stories:

I grew up in suburbia in the second half of the 20th century. My parents were both from New York (the Bronx and Brooklyn) and raised Jewish. When they married, they were among the pioneers who left the city for a better life (then) and quickly made friends of similar backgrounds and beliefs. They were loving, supportive parents who worked hard so that my sister and I could achieve things they hadn’t. Above all, my mother wanted us to be happy, but as I realized later, she wanted that happiness through her filter (that’s not a criticism, it was just how she looked at life).

As I became a teenager, I realized I was different. But I shrugged it off. Actually, I ignored it. Hoping it might go away. But it lingered, as I got older, yet I still was committed to the good life, which meant having a family. But it also meant hiding who I was. I was good at hiding. Even though it ached me inside. And it probably (not probably) affected the way I acted outside. I hid longer. Until I finally was so fed up with being unhappy.

I couldn’t utter a sentence that started with “I am…”. All I did was hurt myself. But when I did publicly come out as a gay man, I started living. As I look forward to my husband’s and my tenth wedding anniversary in three months, I have achieved what my mother wanted for me. Yet, it’s through my own filter.

I migrated to the United States from the Caribbean when I was 12 years old; it was quite a shock. Not only did I have to quickly learn English to make sure I did not fall behind in school, but I had to acclimate to a completely new culture. In this process, I quickly came to grapple with the concept of identity. For the first time in my life, I had to understand the concept of being Hispanic/Latino, which is unique to those living in the United States, as back where I am from, we only see ourselves as Cubans.

Going to school in a predominantly Hispanic area brought comfort, but that did not shield me from being made fun of for being a refugee or having a thick accent when I spoke English. I did not let it get to me, but I did see how as I went on to high school and applied for college, many of my peers chose to “whitewash” themselves to fit in or even get a seat at the table.

Although my accent has gotten “better” and my knowledge of American culture has grown to where I can fit in most environments, I am glad I never decided to hide my identity as a Hispanic immigrant or to try to “whitewash” myself for the sake of creating comfort for others.

Even though the concepts of Hispanic and Latino are collective identities, they are still individualistic. As an individual, it is important to me to be in spaces in which I feel comfortable speaking with my accent and being very Hispanic, without anyone telling me to go back to my country. Because this is my country.

Ever since I was a kid I’ve had to explain who I am. My parents, being of the generation that was strongly nationalistic decided that I would be “Judit without an h” in a nod to vanish colonial practices of a letter that was mute in Spanish. In primary school I had to constantly explain that I did know how to spell my name and that it was “Judit without an h.” Ever since then I’m a firm believer of introducing myself as “I am Judit” not “my name is Judit.”

When you’re a child that is moving from one place to another, you cling to those pieces of you that have formed and shaped you. In my case, it was my Mexican identity that I was proud of, but was often misunderstood: I moved from Mexico City, then the largest city in the world, to a small university town in Wales and then to the suburbs of Glasgow. Amazing places that are at are close to my heart, but more often than not I had to explain that no, I didn’t have a donkey we got around by car, and that yes, I was truly Mexican even though I did not have dark skin.

The privilege of being a light-skinned Mexican that speaks English with a British accent has certainly been a low cost to pay for being called everything from Georgette, to Jovit, to Julie. Harder to swallow have been instances in my professional life where my “Mexicaness” has been dismissed in favor of comments of the likes of “oh but you don’t really look Mexican, you’re really English right?”

The ability to work in a place that doesn’t just value and respect, but encourages each of us to show up at work fully, bringing everything we have and who we really are is something I treasure every day. My full identity allows me to be a better colleague and give smart counsel to clients.

Identity in the Workplace

The workplace has for long been a place that inadvertently caused people to downplay their identities, despite the talk of “work-life balance” and more recently, of “bringing one’s full self to work.” It’s been a place where many have had to “fit in” to a type—especially in white-collar jobs–to get ahead. We’ve all heard and been asked about the “type of person” who fits with the culture or what set “company x people” apart. This is because many fear the consequences of coming out or being their truest selves can have in their professional careers. It also has a lot to do with the fact that being out in the workplace and bringing your full self is not something that is discussed as much as it is welcomed, prompting people to not know what constitutes being professional when sharing about your identity. Not to mention how immigrants or those whose native language is not English might not feel they could fit in, be celebrated, or get promoted if they act “too (fill in the blank)” for the fear of being seen as unprofessional or inadequate.

Oftentimes, one is identified more as being an employee of their company rather than being identified by who they are. Although identity is just a part of who someone is, it is a major, most important part, without which people (and employees) can’t give their job, family, community, and career their 100% selves. Skills and talent are important, but so is creating an environment where people can be who they are, and don’t have to worry about which lens people see them through. 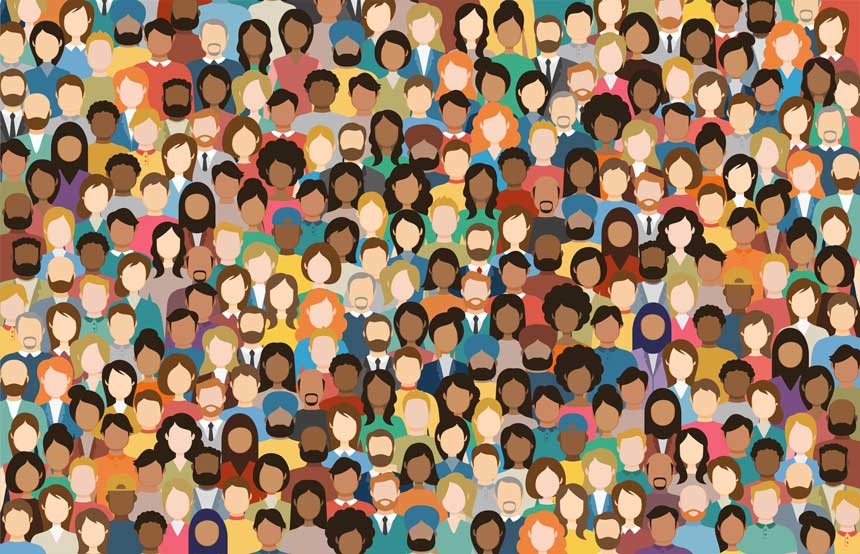