Looking for the impact in the wider EU of President Macron’s first year in office, a hostile observer might well ask, “Where’s the beef?” The deep reforms to the Eurozone that he has advocated seem likely to be significantly watered down by Berlin; his proposed institutional fixes such as transnational electoral lists for the European Parliament will not be adopted in time for next year’s vote; his ideas for stronger co-operation on defence, security, sustainable development, education and research remain on the drawing board. The citizens’ consultations which he has promoted are struggling to get off the ground.

And yet. Let’s not forget that France’s 2017 presidential election came only eleven months after the Brexit referendum, and barely six months after the shock victory of Donald Trump. At the start of last year, the world order which had maintained democracy in Western Europe for seventy years, and in the east for almost thirty years, seemed under apparently enormous threat. The fact is that the emergence of a charismatic leader who speaks with enthusiasm as a European statesman, not just a French president, has given many in Europe a new feeling of confidence and enthusiasm about the project.

True, there are still clouds on the horizon. The chaos in Italian politics, the sense that the end of the Merkel era is nigh, and the continuing problems with the rule of law in Poland and Hungary illustrate the problems that the EU project faces. And President Macron seems sadly hesitant to share the benefits of European integration with the Western Balkan states, who are very keen to progress their long-held aspirations to join their neighbours inside the EU.

The looming decision point – for voters, not for leaders – is the European Parliament election scheduled for May 2019. It is likely that En Marche will win the most seats in France, particularly now that there will be a single national voting district; the Front National is divided, so is the Left, and Les Republicains are shattered. But what then?

There has been much speculation that En Marche could form the core of a new centrist group, destroying the Liberal ALDE and eroding the fringes of the centre-right EPP and centre-left PES. But this does not take into account the institutional strength of the existing pan-European parties, most of whom have invested considerable resources into strengthening their current relationships, and the rest of whom may not be immediately convinced about joining a new and untested grouping which will be dominated by the French.

It is more likely that En Marche will have to find an arrangement with one of the existing groups – probably ALDE, which is on course to make significant gains, as opposed to the forecast losses for the two biggest groups. En Marche will certainly be the largest element within any such arrangement, but it will not have the dominance in the group, let alone the European Parliament as a whole, that it currently enjoys in the French National Assembly.

Can President Macron accommodate himself to being one of several important leaders within a smaller political grouping? Of course, the real divide in the 2019-24 period is likely to be not between centre-left and centre-right, but between Euro-believers and Euro-sceptics. And the French President has already become the de factor leader of the true believers. The size of your political group may not matter as much as what you do with it. 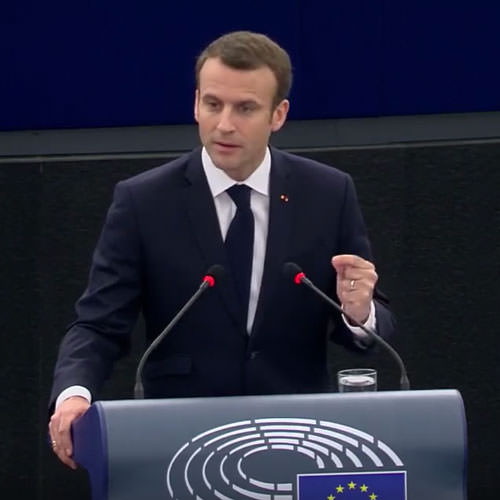