Tech City UK, the subtly rebranded trade body promoting the technology sector across the whole of the United Kingdom, launched its third annual Tech Nation Report today.  The report seeks to quantify the state of the industry’s contribution to UK PLC and identify areas for improvement, if recent advances are to be maintained. Especially since Britain voted to leave the European Union, a day doesn’t go past without a particular industry publishing a report that delicately balances self-congratulatory backslapping with gloomy predictions of impending decline. Has Tech Nation 2017 and the digital industry as a whole broken the mould?

On the one hand, the location of the launch event was a clear sign of intent. The use of the Royal Institution, home of the groundbreaking Christmas Lectures and with alumni such as Michael Faraday, signalled how the tech community wants to cement its place in British history as a revolutionary, global force.

The breadth of the attendees, from the CEO of the multinational Sage to a first-time app developer based in Belfast, was testament to the convening power of Tech City UK, which was also vindicated by the keynote speech given by the Culture Secretary Karen Bradley – or the Cabinet minister for Tech, as she was introduced by Gerard Grech, CEO of Tech City.

Ignoring for a moment the gigantic elephant in the room – Brexit – the Minister’s speech and the subsequent panel discussions were notable in demonstrating the progress made in recent years. Gone was the pure tub-thumping, the ‘UK is good at digital’ narrative, and in its place was an agreement that the various public and private sector initiatives previously operating independently, are starting to come together into a cohesive landscape that will enable even greater growth.

In particular, Bradley spoke to how the Government’s Digital Strategy aligns with its overarching Industrial Strategy and how the latter is driving the majority of policy-making decisions. She also tried to allay the principal fears outlined in the report, including the lack of homegrown talent, gender diversity and ensuring the availability of funding at every stage of a company’s growth. Yet her hands are tied on many of these challenges until the UK’s Brexit negotiating position becomes clearer and, ultimately, by what is finally agreed in early 2019.

On the other hand, despite the growing cohesiveness between Government and the technology sector, the policy landscape still suffers from a veritable alphabet soup of initiatives, processes and structures. From the Digital Strategy, to the Digital Transformation Strategy, and the Digital Economy Council to the Digital Economy Advisory Group, Theresa May’s government is particularly guilty of initiative-itus. The Royal Institution was filled with start-ups, who as poster-children of the report are lucky in being inside the stakeholder tent, profiting from all the support that this entails. For those on the outside, the first-time entrepreneurs who haven’t spent the last two years networking in Silicon Roundabout, then taking advantage of all the available support can still be very difficult.

Tech Nation 2017 is a thorough and in-depth report that presents the case for the past and hopefully future success of the digital economy. Yet the sense that the majority of the technology sector are inside the echo-chamber, preaching to the converted, still persists. Dramatic growth and fantastic innovations are taking place all around the UK – a new tech firm is started every 60 minutes – but it is ultimately in the universities, research centres and even the spare bedrooms that the real progress is being made and not at a symbol of the establishment in Mayfair. As with so many challenges facing Theresa May, now is the time to put warm words into action. 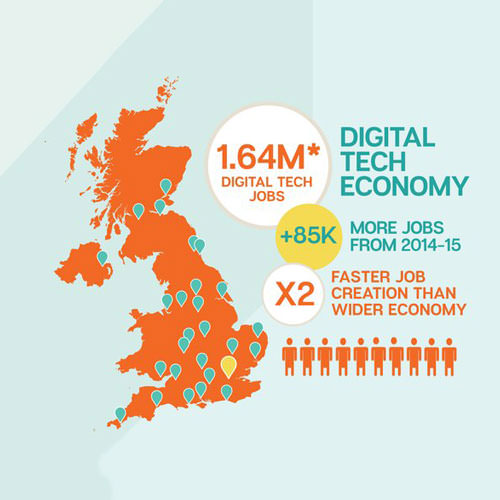