“It starts with that fire in the belly, when you want to be a part of something bigger than yourself” – Rep. Jackie Speier

However, getting to this point was no easy feat—it was a long and arduous journey, sparked by the fiery determination of suffragettes like Susan B. Anthony, Alice Paul, Elizabeth Cady Stanton and Lucretia Mott.

Following the Seneca Falls Convention, it took more than 70 years of petitions, rallies and picketing for the U.S. government to ratify the 19th Amendment, granting women—specifically white women—the right to vote. For many African Americans, Native Americans and other minority women, the fight for suffrage persisted for years to come.

Native American women gained voting rights in 1924, and black women did not have true suffrage, with select civil liberties, until 1965. Despite these achievements, women around the world continue to face harassment and discrimination simply for voting.

Celebrate the Past, but Focus on the Future

As the largest majority women-owned communications firm in the world, APCO holds at its core, a fiery focus on the advancement and empowerment of women and girls. Earlier this month, we partnered with the CloseUp Foundation and the American University to host “A Century of Progress: The Next 100 Years (The Next 100).”

The Next 100 provided a platform for high school and college students to discuss political parity, gender equality and the perception of women leaders with seven current members of the U.S. Congress, including Rep. Jackie Speier, a prominent force during the #MeToo movement, and Rep. Sharice Davids, the first openly LGBTQ Kansan and one of the first two Native American women elected to Congress.

While stressing the importance of celebrating our past, The Next 100 focused on creating a better future for the next generation of young female leaders. I hope that crafting a new narrative through actionable steps will inspire our employees, current and future, to build this new reality.

The largest companies in the world have the capacity to employ thousands of people, and their geographic reach and scale put them in the best position to effectively and promptly implement societal changes. Therefore, we must encourage organizations to take initial ownership of constructing an environment where women see their female colleagues as a support network to rely on, feel empowered to voice their opinions and step into leadership positions with the confidence to change the world.

Small impacts make a big difference. Start with internal company policy changes or making a commitment to actively work towards equality. Levi Strauss & Co.’s new family leave policy and Blackstone’s commitment to gender diversity on director boards are prime examples of changes, for which organizations can advocate and support. APCO has implemented initiatives such as D&I Council and a women leadership affinity group to make sure voices from all backgrounds are heard.

But change is more than just corporate policies. To have a real impact on communities, organizations must step back and ask how their work impacts women and girls around the world. At APCO, we’ve fostered a culture that grows our people to their highest potential and takes a deep look at every client we bring on to make sure the work creates a difference in our society. We work with our clients to build thought leadership campaigns on subjects like women’s health, run a STEM program for female students in Asia and curate D&I Advisory Boards.

Companies around the world are changing their work to do better. Check out Sodexo’s commitment in 2016 to helping survivors of gender-based violence or Vodafone Group’s paid “safe leave” policy for those experiencing domestic abuse. Both of these companies understand the ripple effect violence has on an individual and took steps to ensure current and future employees had necessary support.

What is stopping organizations from being more involved? Because truth be told, the time for excuses is over. Companies must lead the way in fueling the fire connecting us all and work together to convince others to join the movement, making sure nobody gets left behind.

The choice is yours. Every woman around the world has a right to a brighter future. Every. Single. Woman. And it is our responsibility as business leaders to see that it happens. A true difference is attainable only with participation from all.

Learn more about APCO Worldwide’s The Next 100 event by watching the following video: 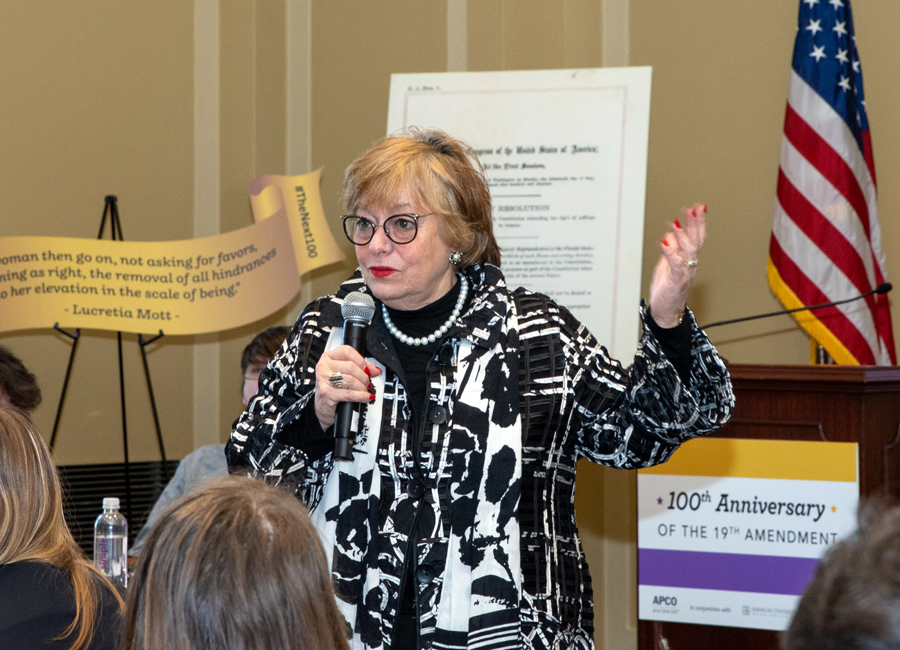