Too often, Asian American and Pacific Islander (AAPI) communities are lumped together as a monolithic group. Typically, the amorphous label of “Asian American” is used as a catch all, one that uses “East Asian” as a vague standard despite its ambiguity and inherent inequity. However, consisting of more than 50 ethnic groups with different cultures and histories in the United States, the diversity of AAPI heritage and experience is truly too vast to simplify under such a simple label.

As immigrants settle and make homes for themselves in America, these groups continue to remain some of the most socioeconomically, politically and culturally diverse groups within America. Out of over 20 million AAPI identifying Americans, it is significant that nearly two-thirds of that population identify with their specific ethnicity or country of origin.

And the differences only increase from there. No two cultures are the same, as no two experiences are either. Asia, broadly speaking, is home to many different religions, faiths, cultures and languages—over 2,000 languages and dialects are spoken across the continent. Each culture has its own views on educational attainment, financial security and filial duty. Each group has its own social and familial pressures that it faces every day. In short, the second-generation Indian university student has a vastly different experience from the recently immigrated Vietnamese family of four.

All of these details, small and large, make up a richly diverse and complex collection of communities and people, each with its own histories and stories that matter. Unfortunately, through years of assimilation and change, much of these details are swept under the broad label of “Asian American.” The original intent behind the term “Asian American”—first publicly used by student activists Emma Gee and Yuji Ichioka in 1968—was to unite various groups of people of Asian descent, not to generalize across a wide range of diverse communities. Although it may now not seem like such a momentous moment in history, the term Asian American was “a radical label of self-determination that indicated a political agenda of equality, anti-racism and anti-imperialism. Asian American was an identity that was chosen, not one that was given.”

Now, more than 50 years later, AAPI communities across the nation are struggling with continuing legacies of inequality, racism and identity as Americans.

The model minority myth and media depictions of Asians that only focus on a wealthy subset of the AAPI community homogenize the varied socioeconomic experiences of Asian Americans. The myth paints all Asian Americans as economically prosperous achievers of the American dream—and it cloaks the trials of lower-income AAPI communities.

Yet here’s the reality: Asian Americans are the racial group with the nation’s largest wealth gap. Income inequality within the Asian American community nearly doubled between 1970 and 2016, and the highest-income Asians now make more than 10 times as much as their lowest-income counterparts. In New York City (the very city the lead characters in “Crazy Rich Asians” call home, no less), Asian Americans constitute the poorest immigrant group. The stark income disparities within the community play out even within the universe of a single business, where those at the top of the corporate ladder prosper, far removed from the struggles (and violence, as devastatingly illustrated by the Atlanta spa shootings) endured by those doing the day-to-day work.

Historical immigration patterns partially explain the economic chasm within the Asian American community. Many Asian immigrants who initially arrived under the Immigration and Nationality Act of 1965 and following the Vietnam War came from economically marginalized backgrounds (for instance, large groups of Vietnamese, Cambodian, and Laotian Americans arrived as refugees during this period). Later, the Immigration Act of 1990 ushered in a wave of high-earning Asian immigrants under the H-1B work visa program.Stark income disparities translate into a vast gamut of lived experiences with racism and of priorities when it comes to the fight for justice. While some see the fight for representation as key, others have found it to be largely an issue for the privileged. Many lower-income Asian communities, especially lower-income Southeast Asian communities, are dealing with struggles that include being targets of deportation, police brutality and displacement spurred by gentrification. And while many in the corporate world are pushing for diversity, equity and inclusion, those who work in service jobs, including at spas and nail salons, are more vulnerable to the whims of their white clientele and may not have the luxury of thinking about or demanding improvements in DEI.

Given the complexity of AAPI identity, it is crucial to acknowledge and embrace these differences in experience. But beyond just acknowledgment, what can organizations and individuals do to be catalysts for progress?

To start, it is critical to champion and uplift the voices and people that differ from the mainstream stories. Doing so actively confronts structural discrimination through the preservation and celebration of the individual and collective existence of human experience. It may be a difficult conversation, but it’s a critical step in fighting the assumptions based on harmful, reductive stereotypes.

However, the onus of confronting and taking tangible action to fight structural discrimination shouldn’t fall solely on those facing the biases. Organizations and those in leadership positions can commit to ensuring robust AAPI representation in their organizations, including in leadership positions—Asian Americans are among the least likely to be promoted to management positions—as well as in their lists of clients and vendors throughout the supply chain. Organizations need to ensure that they’re supporting AAPI employees at all levels of seniority and across their supply chain, not just those in higher-earning, white-collar positions.

Additionally, companies can demonstrate broader solidarity, beyond their organization, by supporting AAPI organizations, businesses and social efforts—including those that are often overlooked or cloaked by the model minority myth. 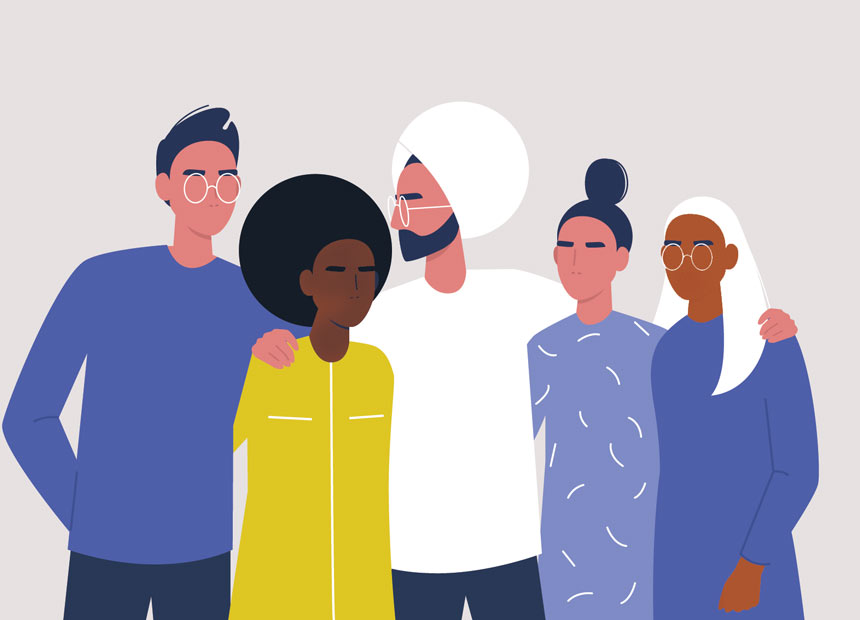