This article was original posted in the Diplomatic Courier.

When Xi Jinping first became leader of the Communist Party, president of the country, and head of the Chinese military five years ago, he characterized China’s relationship with the world as the country’s “catch up and overtake phase.” At the Communist Party of China’s 19thCongress in late October 2017, Xi made it clear that he now believes that China has reached the “overtake phase.”

In his three-and-a-half-hour political report to the Party’s 2,300 top officials, Xi laid out a vision for China to lead the world in everything from science and technology, to modern weaponry and military might, to providing a model of economic development and governance for other countries to follow.

Xi as a Supreme Leader Now Facing the World

Xi indicated that he plans to personally lead this effort for many years, perhaps even beyond the traditional ten-year tenure institutionalized since Deng Xiaoping. The most enduring hallmark of the 19th Congress was the addition to the Party constitution of: “Xi Jinping Thought on Socialism with Chinese Characteristics for a New Era,” which placed Xi on an equal footing with Party founder Mao Zedong. This will allow him to take the Party in new directions during this “new era”, unshackled from any mistakes and limitations of the past.

To put this in perspective, Mao Zedong “thought” was added to the constitution when Mao was still alive. Deng Xiaoping “theory,” a notch down from “thought,” was incorporated two years after he died. Jiang Zemin and Hu Jintao got their respective governing slogans but not their names into the constitution: “The Theory of the Three Represents” and “The Scientific Outlook on Development” for Jiang and Hu respectively.

With his “thought” inserted into the constitution while still in office, Xi’s thinking will be more important than that of anybody else, even if he does not nominally remain in either of his three official leadership positions. After all, Deng Xiaoping maintained dominance in his later years though his only official title was chairman of the Chinese Bridge Association.

The Party Congress marked the culmination of Xi’s five-year quest to reorient Chinese governance from an intra-Party consultative system to a strict top-down Leninist model. Xi has transformed himself from a crown prince of the Party to a supreme leader who cannot be questioned. His additional designation as the “core” of the Party helps dispel any notions that the collective leadership system sought by Deng Xiaoping is still part of the governing equation.

Xi came into office haunted by the Soviet collapse, declaring that “nobody was man enough to stand up and resist.” It is not surprising that the focus of his first term has been on saving the Party. His rhetoric indicates that he considers it a sacred mission owed to his father Xi Zhongxun and the other revolutionaries who sacrificed to build the Party and create the People’s Republic. With a PhD in Marxism, Xi is determined to inject more Communism into Communist China.

The Congress was preceded by a four-and-a-half-hour television documentary aired nationwide to celebrate Xi as a globetrotting world leader. As one state television anchor put it: “Wherever he goes, Xi Jinping sets off a whirlwind of charisma.” With the United States withdrawing from global leadership and democratic societies in the West in a state of flux, this Congress accelerated China’s push toward global leadership.

Chinese leaders of the past described the country’s system as uniquely Chinese and unfit for comparison with other nations. But Xi declared in his political report that China is not only ready to “take center stage in the world” but China’s “socialist democratic politics” and “socialism with Chinese characteristics” economic model constitutes “a great creation” that offers “a new choice for other countries.”

Xi’s quest to “overtake” hinges on the idea of making China “great again.” This is packaged into two slogans: “The Great Rejuvenation of the Chinese Nation” and “The China Dream.” To accomplish this, as the revised Party constitution put it, “the Party exercises overall leadership over all areas of endeavor in every part of the country.”

The concept of “Chinese characteristics” is key to this quest. Xi envisions a China that is more Chinese, with children who have “patriotic enthusiasm” and Party cadres who take orders from the top and selflessly serve their constituents. The way forward in Xi’s vision is for the country to be a global leader without adopting Western values and practices. As he said at the outset of his rise to power, Xi wants China to “unswervingly walk a path of its own.”

The “new era” nomenclature for Xi’s rule is designed to evoke a new chapter for the Party that incorporates the lessons from the entirety of its past, and not just from the reform era. Unlike his immediate predecessors, Xi does not negate the political movements of the Great Leap Forward and Cultural Revolution. Instead, Xi views the past as “two phases” that are “at once related to and distinct from each other” and “are both pragmatic explorations in building socialism.” In other words, Xi has digested and distilled all the hard-earned wisdom from the Party’s past successes and failures, and carried these forward in his own “thought” for the “new era.”

The ambitious agenda laid out at the Congress carries many uncertainties despite the resoluteness on display. Xi has promised to win the battle against poverty, clean up the environment, purify the food supply, tackle corruption, and improve government inefficiency while promoting “the creative evolution of traditional Chinese culture.” He has pledged to build a “beautiful China” with quality schools, world class universities, and modern hospitals and health care. He will “foster a political ecosystem featuring honesty and integrity” while creating a society that is “full of vitality, harmonious and orderly.”

Xi did not specify economic growth targets in his work report, which could be viewed as acknowledgement that his earlier promise to double the 2010 per-capita income level by 2020, has resulted in increasingly dangerous levels of debt pumped into China’s highly leveraged economy. What Xi plans to do with the Party’s market oriented economic reform agenda laid out during the Party’s third plenum in 2013 remains a glaring question.

While the Congress rhetoric once again declared that “the market will have a decisive role,” making state-owned enterprise “stronger, bigger and better” appears to be Xi’s top priority. In an example of the increased emphasis on ideological purity, Party cells have been aggressively inserted into foreign and private enterprises while Party decision making powers in state-enterprises have been strengthened. The largest state-owned enterprises listed on the Hong Kong market for example, have changed their articles of association in the past year to indicate that the Party, and not the state, is to play the key role in company management.

Xi is also focused on technological dominance that will enable Chinese companies to lead the world. Xi’s signature policy of China Manufacturing 2025 was highlighted during the Congress as providing the blueprint for this buildup of China’s national strength and industrial prowess. Aimed at Chinese self-sufficiency in all the important technologies of the future, the policy covers everything from artificial intelligence, to cloud computing to industrial robots to semiconductors. It lays out specific targets and goals for replacing multinational companies with domestic companies in the Chinese market.

Beyond this, there are a portfolio of other challenging policies and plans, including a “Social Credit System” that will use electronic surveillance and big data, described by some as “digital Leninism,” to track the actions of Chinese individuals and companies and rate them by their trustworthiness.

In addition to turning away from Deng Xiaoping’s idea of collective leadership, Xi has made it clear that there will be no separation of powers between the Party and the government. Xi’s crackdowns on corrupt cadres as well tightened control of civil society, has created space to set his own agenda as he sees fit. While he has cowed potential rivals and submerged dissenting opinions, Xi has also constructed a brittle and frightened system harking back to the “tremble and obey” edicts of the imperial age.

Pragmatic policy making and the ability to get around unworkable regulations with common sense solutions has been the great strength of China’s system in the first several decades of reform. Today, the system is often frozen as Party officials practice a combination of “fear and loafing.” Fear of the gunsights of the anti-corruption campaign, or failing to follow the law to the letter is leading to a paucity of decision making at the national and local levels. This has resulted in the emergence of a passive aggressive attitude which Premier Li Keqiang referred to when he said that the “laziness” and “passivity” of local officials constituted a “sort of corruption.”

This problem was tacitly acknowledged by Xi in the unveiling of a “supervisory committee” at the national, provincial, county and city levels that will carry out “strict governance” of the behavior and performance of Party cadres and government officials. To make it clear that this is not a group to be ignored, these committees will be co-located with the offices of the Party’s much-feared Discipline Inspection Commissions that have led Xi’s anti-corruption drive.

The seven-member Central Standing Committee announced at the end of the Congress was essentially a team of advisors. Xi also provided no indication of how long he will remain in power and who would succeed him. Being the general secretary of the Party, the president of the country, the chairman of the central military commission, official media has been peppered with descriptions of Xi that heretofore were only used to describe Mao Zedong. Xinhua has called him the “unrivaled helmsman” while military media has referred to Xi as “lingxiu” an honorific title only used for Mao.

The overarching message and the prevailing attitude at the Congress was that China is a country that is confident about where it sits in the world and where it is headed. As this “new era” unfolds, government and enterprises around the world must keep a close watch in order to sort through the opportunities and obstacles that will emerge. “China has stood up, grown rich and become strong,” Party mouthpiece Xinhua News Service says, “It is time to understand China’s path because it appears that it will continue to triumph.” 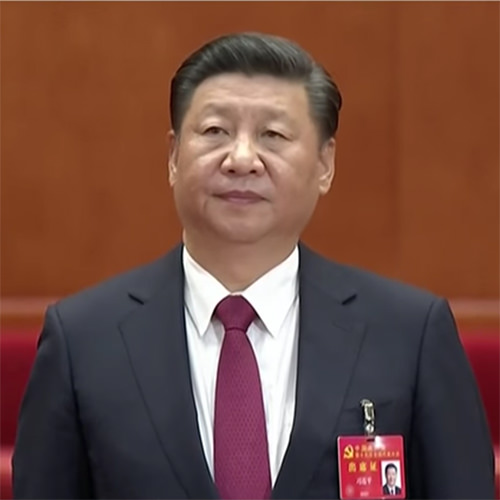