On June 6, UK Prime Minister Boris Johnson survived a vote of no confidence called by Conservative Party MPs. Johnson has argued the outcome allows the party and the country to “draw a line” under past scandals and has pledged to stay on as leader. However, his narrow victory highlights the existence of factions within the party and raises the question of whether he can withstand the political pressure or be forced out of office. Consequently, businesses and organisations face an increased need to monitor and prepare for any shift in the direction of government.

While the typical approach to anticipate how policy and priorities may shift under a prospective new leader may assess their voting record and recent statements, the wealth of information in the political Twittersphere allows us to delve even deeper into each candidate’s support base within the wider electorate. 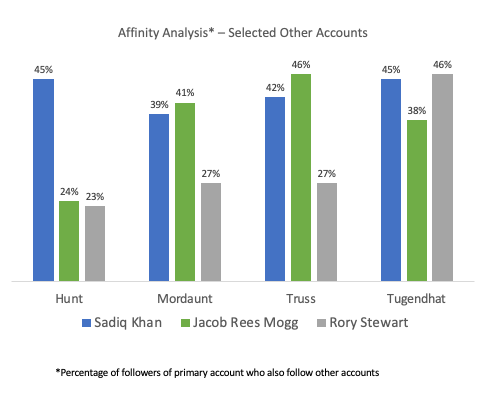 To do this, APCO Insight analysed UK-based Twitter followers of four Tory MPs tipped to succeed Johnson according to two key criteria:

As one of the most vocal opponents to the Prime Minister in recent weeks, the ex-health minister is the current marginal favourite with the bookmakers. Hunt also has the most followers of the four MPs reviewed, with just over 55,000 followers in the UK.

Hunt would represent a return to a centrist brand of Conservative politics, as seen from the high affinity his followers have with former President Barack Obama (followed by 51% of Hunt followers) and Labour’s London Mayor Sadiq Khan (45%). An intriguing window into potential policy directions, were he to become PM, comes from the fact the most-linked content by his followers is a recent article by fellow Tory rebel Tobias Ellwood MP, calling for the UK to re-join the European Union’s single market.

Given her past support for leaving the EU, the Trade Minister has surged as a potential candidate for Tory leader.

Mordaunt’s followers engage with content that shows them to be culturally “small c” conservative: for example, patriotic content referencing the Queen’s Platinum Jubilee and World War II veterans. They also frequently link to reports highlighting JK Rowling’s recent comments on gender. While a Morduant premiership may re-emphasize the patriotism expressed in the “Culture Wars” under Johnson and Culture Secretary Nadine Dorries, Morduant herself is known to be more liberal on social issues, including on LGBTQ+ rights.

Truss has been a longstanding political ally of Johnson, having served in key posts in his Cabinet since he became Prime Minister and is highly favoured in polls of Conservative Party members. At similar odds to Mordaunt with most , the foreign secretary appeals to a similar base yet her public profile has granted her a higher online following (roughly 33,500).

Followership of other accounts indicates an even stronger affinity to the same pro-Johnson figures: Rees-Mogg (46%), Patel (45%) and Neil (58%). Truss supporters’ most-liked tweets are again pro-monarchy, and they are similarly motivated by the gender identity debate. Even their use of emojis is telling: the most commonly used emoji is an abbreviated G(reat) B(ritain).

Highlighting Truss’ own affinity to former Prime Minister Margaret Thatcher, there are signals that Truss followers feel the current cost-of-living crisis the UK is experiencing can be tackled through an element of personal responsibility, strongly endorsing a tweet from right-wing commentator Isabel Oakeshott on food banks.

If Truss occupies similar ground to Mordaunt, Tom Tugendhat—the chair of the House of Commons Foreign Affairs Committee—is much closer to Hunt. Though lesser known than other candidates, seen from his 18,500 UK-based followers, he is well respected within the party as a credible voice on foreign affairs given his time in the British Army.

As with Hunt, Tugendhat’s followers indicate a clear desire to return to centrist politics and include former Tory leadership candidate Rory Stewart (46%), who resigned from the party in 2019 in protest against the Conservative Party’s tack to the right. His cross-over appeal is also highlighted by his followers’ similarly high affinity with ex-Labour communications director Alastair Campbell (46%).

Tugendhat followers also engage with similar content to that of Hunt’s supporters – clearly locating him on the ‘soft’ Brexit wing of the party. Interestingly, strong engagement with a May tweet from anti-poverty campaigner Jack Monroe contrasts with how Truss supporters engage on the cost of living debate, and indicates strong One Nation principles.

The vote of no confidence in the Prime Minister and an examination of potential successors brings to the fore a fundamental question facing Conservative politics, and indeed that of the UK as a whole—whether a return to centrism or a continuation of more populist leaning policymaking. Divisions over the legacy of Brexit and the UK’s position in the world, economic concerns in light of rising inflation and sociocultural flashpoints will therefore continue to challenge the Prime Minister and any of his potential successors (whether from within his own party or not).

In this context, political decision making on key files could have a significant impact on multinationals operating in the UK. Under Johnson or the election of one of his allies, businesses should be prepared for some continuity in the UK’s fractious trade relationship with Brussels over the Northern Ireland Protocol, which governs the movement of goods between Northern Ireland and the rest of the UK. Anticipating and managing the fallout of the Government’s plans to scrap certain elements of the Protocol is increasing uncertainty for trade as legislation was introduced by Truss just this week.

On the other hand, a shift to MPs in the rival faction, such as Hunt or Tugendhat, may reduce some of the critical rhetoric against the EU and could allow for continued regulatory convergence with the EU on critical areas, such as on data policy. However, a new leader will also inherit the same internal factions pushing for a continuation of the UK’s current trade policy against Brussels.

To navigate the economic and political uncertainty ahead, it is more important than ever that businesses and organisations plan ahead for all potential scenarios, including:

Keeping track of political developments in all of the UK’s political parties, especially an equally divided Labour Party, should also inform business scenario planning ahead of the upcoming election.

Part II of our series – upcoming – which will analyse the internal factions driving policymaking within the Labour Party. 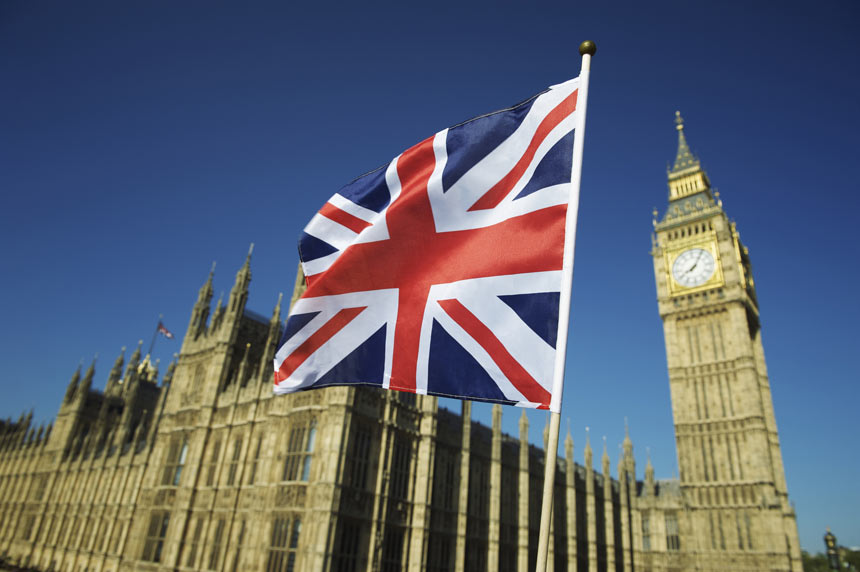