Every five years, the turning of China’s political cycle is marked by the convention of the NCCPC. On October 18, 2017, the 19th NCCPC will be held in Beijing, presided over by President Xi Jinping who is expected to continue for a second five-year term as general secretary.

Ideological orthodoxy is being placed above institutional reforms as decision power is increasingly concentrated at the State Council level. This is partially due to a desire by Xi to promote “Chinese values”, but also partially due to the inability of previous ministries to effect real reform. Reforms now often come after leadership figures are removed and are then kept under the close supervision of the Central Commission for Discipline Inspection (CCDI).

Purges of various departments at the national and local levels continue unabated. This has disrupted the availability and reliability of government stakeholders for businesses, and is causing ‘institutionalized inertia’ at the working level of some industries, whereby decision-making mechanisms have ground to a halt.

Globalist position mainly directed towards exports, while domestic markets are becoming more protectionist as the economy falters and industrial overcapacity is becoming a critical issue, not just for the economy but also for social stability.

Slowing economic growth spurring the growth of
e-commerce as a potential support for traditional trade, especially across borders.

Non-tariff barriers to trade on the rise as China attempts
to control imports and maintain a positive imbalance with trading partners.

Intensified ideological control spreading into all aspects
of economic and social life, with NGOs registered and monitored under new NGO law. Foreign NGOs now come under a new law aimed at increased supervision.

Ideological control stifling academic innovation despite frequent calls for the latter. Academic institutions are purged of foreign ideas and core “Chinese values” are promoted instead. Content from overseas educational entities is under more scrutiny than ever before.

Xi is likely to first demonstrate the success of his first term before setting the direction of the economic, political and military trends for the next five years. The following is an overview of the key developments to look out for at this key political event which will impact foreign businesses in China in the coming years.

It is likely that the Politburo Standing Committee (PSC) will drop to less than seven members. A consolidated PSC, the highest decision-making body in China, would result in a faster turnaround for policy making. On the other hand, there may be less room to influence policy decisions with a limited number of advisors around Xi.

Even though Xi Jinping and Li Keqiang, the current premier, will stay on for a second term, five of the current seven PSC members have reached the unofficial retirement age of 68. This offers Xi an opportunity to consolidate his power and cement his position as “core leader” within the party by reshuffling the PSC. Any new members will have a direct impact on the overall policy environment in China.

Supported by a more stable and centralized decision making body, Xi should be able to push forward the long-term strategies that he announced when assuming the position of general secretary in 2012, including market-driven reform, remodeling state-owned enterprises and tackling debt, albeit according to his own dogmatic, ideologically entrenched vision. The pace of reforms and rebalancing will likely pick up speed beyond the 19th NCCPC.

Tens of thousands of officials have been penalized under the anti-corruption drive launched by the current administration in 2013. The drive is one of the hallmark campaigns of the current leadership and is aimed at improving the Party’s image, consolidating power at the center, and to push forward structural reforms.

The State Council is likely to exert more influence over policy decisions and economic activity with a stricter path of reform. Certain industries will be given more freedom. In return, they will have to comply with not just performance standards, but ideological ones too. Taking on the role of an arbitrator in increasing the ideological supervision, the State Council will likely overshadow existing regulators in power and influence.

Certain industries will also be required to establish party committees within their organization to monitor activity internally.  The committees, a more centralized regulatory system headed by the State Council, and other mechanisms will all play a part in heightening party scrutiny of businesses in China.

China-centric Relations for the Economy and Trade

China has taken on a noticeably more assertive foreign policy stance since the 18th NCCPC in 2012, expanding its global reach economically by establishing the Asia Infrastructure Investment Bank (AIIB) and Belt and Road Initiative (BRI), assuming a leadership role on the Paris Climate Agreement and other multilateral initiatives and promoting the Renminbi as an international reserve currency.

In terms of trade, China has responded to the U.S. leaving the Trans-Pacific Partnership (TPP) by seeking to bring together the interests of Asian nations in the Regional Comprehensive Economic Partnership (RCEP). In the Partnership, China has sought a leadership role when setting rules for international trade. A more assertive trade policy globally will be crucial for China to support the agenda for its Belt and Road Initiative. Several international organizations, including the United Nations and G-20, have seen China take a more active role.

China under Xi will continue to espouse so-called “economic globalization” for trade and outbound Chinese investment, but internal economic concerns such as industrial overcapacity and industrial policies will result in more protectionist measures internally. This will make market entry an increasingly difficult process, while Chinese state-backed funds will continue to seek ways to acquire strategic assets in, and entry-points to, international markets.

For more information on the role of the NPC, please view/download the below graphic. 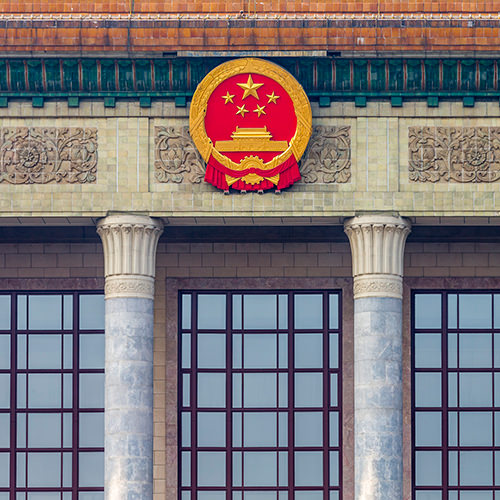