As we celebrate Women’s Equality Day in 2017, commemorating the historic date that American women won the right to vote in 1920, we should momentarily pause and reflect on how far we have come in less than a century. As a woman who came of age during the women’s revolution of the 1960’s, I remember that when I entered the workforce, I could not work past my sixth month of pregnancy and few occupations beyond nurse and teacher were welcoming to women. Much has happened since that time, but we cannot take these steps forward for granted. We are still paid 70 percent of what men are paid in many professions and only a small number of Fortune 500 CEOs are women.

Numbers alone don’t tell the story. Equality is not simply a destination we aspire to reach, it is an environment that we must build and constantly maintain. Every woman who has risen or has aspired to rise can point to countless examples of roadblocks like unconscious bias, lack of inclusion or degrading comments that have come her way. I remember meetings where I was the only woman in the room – some were years ago, and some were weeks ago. All seemed wrong.

To be fair, this happens less and less and as I travel around the world, I do sense a genuine effort to elevate opportunities for women and a recognition of the business case that a diverse workforce is a more productive and profitable one. Even in traditional societies like Saudi Arabia and Japan, women are being recognized as an important part of the economic future and are increasingly welcomed in the workplace. But we still have a long way to go. There are still far too many times that women are not included or even worse, are added for diversity purposes. They often face the difficulty of not being included in things that matter, face a hostile work environment or one where there is little support or few role models.

Every time this happens it sets back the cause for all women. These types of experiences can be degrading, but they can also serve as learning experiences. Women who have broken through, or, even more importantly, men who value their female colleagues, have to work hard to make sure that the work environment is inclusive and offers opportunities to mentor and bring forward women who have the ability to succeed. Otherwise, the really good women won’t stay.

Perhaps this is the reason that so many more women start their own enterprises where they are able to control their own destiny. Not surprisingly, Women President’s Organization (WPO)—the premier organization for women entrepreneurs—revealed in their Business Outlook Survey that most women identify their own drive to succeed as one of the primary reasons for their success today.

If we are to truly realize the legacy of those brave women who fought for equality almost a century ago, we need to make the journey easier for those who will come after us. We need to make sure that corporate leaders step up their efforts to recognize examples of successful women and know they are the rule not the exception, and that if you have the merit to succeed you will have the opportunity. Period.

It is not enough to have good will and a commitment to diversity. Employers need to provide support through programs and a supportive culture backed by institutional measurement of leadership’s ability to manage and reward diversity. These are the actions that make a difference and send an unequivocal message that there is no place for anything less than total support for diversity and inclusion.

Men must be equal partners in this endeavor. Increasingly it is the voice of committed men who are making a real difference. Since they are clearly the majority in the seats of power, their actions can magnify opportunities and speed progress. Conversely, their inaction will only serve to move the elusive goal of real equality to another generation. Only through this partnership will we recognize the progress that will fulfill the extended aspirations of the women of 1920 beyond being heard and gaining access to the ballot box. We will honor the sacrifices they made by pledging to make tomorrow better for our daughters and granddaughters and see the benefit of a truly diverse workplace and a society that values women’s voices in the board room and the public square alike.

Everyone has the power to act and make a difference. It is through this collective action that we will unleash the full power of the opportunity granted to women almost a century ago. It’s about time.

For more on this topic 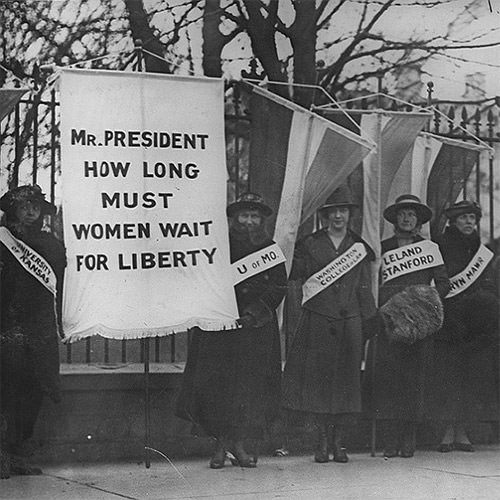