The recently completed annual “Two Sessions” of China’s legislature and advisory bodies contained two notable highlights. On the political side, both confabs were resplendent with “core of the core” choreography ensuring everybody is in lock-step with President Xi Jinping as the unquestioned leader of the Chinese Communist party, with the party in turn as the undisputed overlord of every government entity and action. On the policy side, the prevailing narrative was to “make progress while keeping performance stable.” Or in other words, slow-walking reforms while fast-tracking state-led entrepreneurship and top-shelf technology acquisition.

“Core of the Core”

President Xi sees himself as the party’s third transformative leader behind Mao Zedong and Deng Xiaoping. This was cemented in party nomenclature last October when a party meeting declared President Xi as the “core” of the party.

For the most part, both the National People’s Congress (NPC) and the Chinese People’s Political Consultative Conference (CPPCC) this year were tightly stage-managed rehearsals for the much anticipated 19th Party Congress later this year at which the new leadership lineup will take to the stage.

This was abundantly clear as every public utterance carried a pledge of allegiance that all things will take place “under the firm leadership of the Central Committee of the Communist party of China with Comrade Xi Jinping at its core.” As the official Xinhua news agency put it, “safeguarding Xi’s core status is a political issue of utmost importance.”

In preparation for the party Congress, the leadership also clarified that President Xi would not follow Deng’s path on separating party and government powers. “Under the party’s leadership, there is only division of labor between the party and government, not separation of powers,” President Xi loyalist and party anti-corruption czar Wang Qishan declared. “Within the party, the government, the army, the people, academics, and east, west, south, north, center – the party leads everything.”

Premier Li Keqiang, who is rumored to be at odds with President Xi and facing the possibility of not surviving for a second term, praised President Xi’s “new vision, thinking and strategies for China’s governance” to make it clear that he is on board with the “core” construct. At the same time, he also raised eyebrows of the rank-and-file cadres when leaving the stage of his annual press conference with this quip: “See you again, if there’s the opportunity.”

Hanging like the Beijing smog over the proceedings was the Twitter-tainted visage of President Donald Trump and the unpredictability he brings to U.S.-China ties and world affairs. Faced with such a foreboding landscape, the party signaled that the extensive economic reforms put forth in 2013 will mostly remain on the shelf for at least another year.

Without pointing fingers at the United States, Premier Li declared that China is “ready to face more complicated and graver situations” as “factors that could cause instability and uncertainty are visibly increasing.” Nonetheless, Premier Li also assured delegates that China has the “confidence, the ability, and the means to forestall systemic risks.”

Risk management was certainly high on the agenda of financial regulators, who promised “steady reforms” but seem determined to not trigger investor losses or any financial instability. They promised to reign in shadow banking and impose controls on the risky wealth management products that are estimated to have grown to a size equal to 40 percent of GDP. But the leadership didn’t push forward with plans to create a “Financial Supervisory Commission” to oversee and coordinate the activities of the Central Bank (PBOC) and the banking, insurance and the financial market regulators (CSRC, CBRC, CIRC).

In celebrating the achievements of 2016, party officials heralded 6.7 percent growth last year, with the service sector accounting for more than 50 percent of GDP and China accounting for 30 percent of global growth. But Premier Li also highlighted “major structural problems” and “prominent risks and dangers” while emphasizing that the “government-market relationship” will be the “pivotal issue in economic and structural reform.”

At times the Chinese leadership talked like traditional U.S. Republicans, promising to cut taxes, reduce fees and cut red to “keep pushing hard” on expanding entrepreneurship and encouraging innovation. While there was much talk of private public partnerships to encourage private companies to co-invest with state-owned enterprises (SOEs), it was also clear that the party plans for SOE reforms will continue to be a drawn-out process in order to control the pace of layoffs and keep the party’s grip on the business world.

The great growth hope is entrepreneurship. The central and local governments are accelerating the formation of venture capital funds with an emphasis on supporting forward-leaning sectors such as cloud computing, smart manufacturing, artificial intelligence, virtual reality and big data. Seed money funds are forming to help the country’s eight million annual college graduates form new ventures as they face shrinking job prospects. Premier Li boasted that in 2016, approximately 15,000 new businesses were being registered per day in China.

Boosting the consumer sector is a continued priority, and it is gaining traction, accounting for about two-thirds of China’s GDP growth in 2016. Initiatives outlined by the National Development Reform Commission (NDRC) during the NPC to boost consumer spending included: improving national logistics to speed quality products to the third and fourth tier cities, pushing e-commerce in rural areas, promoting tourism, elderly care, vocational training and entertainment services and facilities.

Regarding real estate, the government is caught between existing property owners who will be indignant about a price tumble and those who are unable to get into the ridiculously priced market. A huge inventory of unsold apartments in secondary cities led to a buying frenzy last year as mortgage terms were eased, with much of the purchasing being speculation by funds smelling growth opportunities. This led Premier Li to declare that: “Houses are built to be lived in, not for speculation.” President Xi made similar statements.

Extensive infrastructure investments are still a key part of keeping the economy perking along. This includes the One Belt, One Road campaign which has China pushing into Southeast Asia, Central Asia, Africa, the Middle East, India, Russia and Europe with highways, railways, pipelines, information networks, port facilities and other massive infrastructure projects. Worries about ballooning debt, which has gone from 160 percent of GDP in 2008 to 260 percent in 2016, has created a predilection for public-private partnerships. So far, no small amount of this involves state owned enterprises and the government, which really adds up to public-public partnerships. In short, infrastructure will keep rolling along to absorb overcapacity in the construction industry and help the party keep “performance stable.”

The smooth and steady “Two Sessions” tenor was thrown off script by vocal opposition to the government’s signature technology initiative known as Made in China 2025. The EU Chamber shrewdly issued its critical China 2025 report just as the NPC opened, and came amid similarly scathing studies from the U.S. Chamber of Commerce, the Mercator Institute, and others. All portray China 2025 as a protectionist blueprint aimed at gutting high-end manufacturing in the United States, Europe, Japan and other developed economies. As the German think tank Mercator Institute described it: “China wants to obtain control over the most profitable segments of the global supply chains and production networks.”

The plan calls for Chinese companies to produce 40 percent of core components and materials in China’s manufacturing chain by 2020, and 70 percent by 2025. This onslaught of criticism led Premier Li to promise equal treatment for foreign companies. Ministry of Industry and Information Technology (MIIT) Minister Miao Wei said the criticism was a “misunderstanding” and the domestic targets are “projections” not to be taken literally. “It is meant to allow the market to play a decisive role in allocating resources.” Miao Wei said.

In their speeches and remarks, President Xi and Premier Li emphasized that China is offering expanded opportunities for foreign companies in China. They reiterated a document issued by the State Council in January that outlines loosened restrictions on foreign access to a wide range of sectors and industries in which China needs foreign help to develop domestic competitors, such as banking, securities and fund management, mining, unconventional oil and gas, among others. The document also encourages foreign investment in China 2025 areas of high-end manufacturing, smart manufacturing, industrial design, modern logistics, test and certification, constructing R&D centers, enterprise technology centers and even post-doctoral research centers. All very positive if only China did not have a zero-sum, self-sufficiency mindset.

Foreign business has become exhausted by the rhetoric of reform and opening while their on-the-ground existence more resembles reform and closing. The government’s pronouncements on level playing fields, equal treatment, and win-win cooperation are now falling on deaf ears. The question in the minds of foreign business is if the next wave of investment openings will turn out like the previous ones. Once China learns from the foreigners and builds its own industries and enterprises, will they once again be squeezed out of the market?

As the United States appears to retreat from leading the multilateral trade agenda, globalization is top of mind for Chinese leaders. No country is more dependent on continued multilateral trade regimes and open markets. Premier Li said that China must “firmly uphold the authority of the multilateral architecture and see that it works effectively; and oppose protectionism in its different forms.”

The Chinese government and foreign business community is focused on what happens after the 19th Party Congress, slated for October or November. Chinese governing patterns are often the opposite of the United States. In their first term, American presidents come in with a mandate and the political capital to get things done. The second term is the lame duck period as the focus turns to who comes next. For China, the first term is lame duck – Beijing duck style – with the focus on eliminating political enemies and potential challengers and installing loyalists across the bureaucracy. President Xi has been a virtuoso performer in this stage, with his anti-corruption campaign aiming at toppling “tigers” and “flies” and every form of political life in-between that could constitute a threat.

Along the way, he has given organizational structure to an authoritarian ideology and governing system that allows and encourages individual fulfillment within the framework of what is good for China as a whole. But President Xi still must deal with the economic distortions resulting from three decades of growth-at-all-cost economics, and every-man-for-himself greed before they implode.

Saving the party has been his top priority for his first five-year term, with the focus being discipline, repression and obedience. Saving the country will likely be at the top of his agenda for his second, that means building a sustainable system that provides sufficient rewards for the citizenry.

In a system in which the leadership appoints itself, power is very fragile. The emergence of Donald Trump and other nationalist political movements in the West has handed China a global leadership role it neither sought, nor is ready for. But now China sits as the leading proponent of globalization and free trade, ironic for a country that has been building ever higher protectionist barriers to foreign business.

But those are matters to sort out in the international arena. This year’s “Two Sessions” and the upcoming 19th Party Congress are only mired in the consolidation of party power under President Xi Jinping as the “core” leader of anything and everything in China.

As President Xi and his inner circle plan how to move forward after the Party Congress, they may want to pay at least passing attention to the one American China-hand who has been willing to speak truth to power: “Empires persist if repression gives way to consensus.” – Henry Kissinger 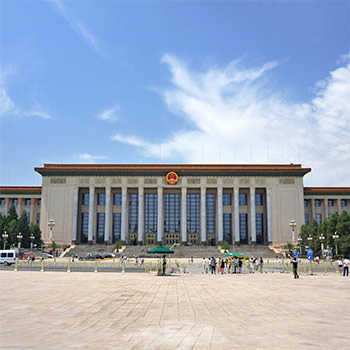