2015 has been a decisive year for Turkey. It has been one marked by uncertainty and surprises, with escalating geo-political posturing and trenchant governmental maneuvering dominating headlines. But on 1 Nov. 2015, President Recip Tayyip Erdogan’s AK Party commanded a majority win, with Prime Minister Ahmet Davutoglu securing a parliamentary majority for the AK Party, which had been lost only five months earlier. These short-lived five months saw the ultimate failure of attempts at political power-sharing, as well as power bestowed once more upon the AK Party.

Unofficial results show 49.4 percent of votes going to the AK Party, which won 316 seats in the 550-seat parliament. The ramifications of such a win will permeate all aspects of Turkish society. Moreover, they appear ready to determine how Turkey will continue to engage with the world. The results are being widely interpreted as voters’ preference for stability over uncertainty.

Rapid economic growth often lauded around the world over the past decade has recently slowed. Turkey has become more bullish with its foreign policy undertakings, particularly in the immediate region. The populous has become more disenfranchised, thanks to creeping social and economic instability. GDP growth rates, once promising and enviable, have begun to slow. These are all factors which are increasingly casting a cloud of pessimism across the business and economic sectors of this vast country of more than 70 million people. The results of the recent election, however, should reignite a sense of optimism among Turks.

Attempts to power-share and merge political ideologies have been far from successful for Turkey in the past few months. The re-emergence of a dominant majority party will likely send signals of sustainability and certainty across the markets, at least in the short term. The AK Party is likely to begin championing a “back-to- business” message to investors following five months of uncertainty.

Turkey has a real chance to make big strides over the next few years. Perhaps most importantly, it has the opportunity to move away from the election fatigue that has proved largely counter-productive to business and economic growth across the country’s beleaguered markets.

And although the AK Party secured 316 seats in parliament, it is still below the 330 seats needed to change the constitution through a public referendum. This will provide some checks and balances for the political forum, and thus likely garner a more market-friendly outcome. One day on from the release of the unofficial vote count, and the Turkish Lira appears to be reaping the benefits of the election results with a 2.8-percent stronger trade at 2.8340 against the U.S. dollar.

The international business community will be watching closely to see how the new government moves toward the inauguration of a credible economic program. This should be a program that derogates from the more recent economic policies and transitions to a period championing high-quality, growth-enhancing reforms aligned with a prudent fiscal and monetary policy. The AK Party will need to commit to a robust medium-term mandate on economic policy in order to ride the wave of the current (and positive) market reaction.

Regionally, Turkey looks set to become even more definitive in its policy of engagement both with the European Union and the Middle East. The EU is likely to push for greater stability in Turkey, not least to foster more secure borders, which in recent times have experienced an unprecedented crossing of refugees seeking to make their way to EU soil. This seeking of stability will not only target security obstacles, but will see more concerted efforts to restore economic growth, confidence and prosperity across Turkey. Such changes have the capacity to bolster civic calm and contentment.

The official results of the election will be published within 10 days by the Supreme Election Council. The new single-party AK Party government is expected to be formed in the first half of December. Yet there is still much ground to be covered before the inauguration of this single-party government. Such ground should bolster and build economic policy in order to appease the international business community and position Turkey on the global stage once more. 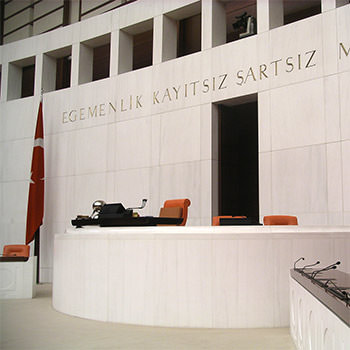