A Country at a Crossroads

Mali’s presidential campaign just ended, with the expected victory of Ibrahim Boubacar Keita (IBK), 73, at the helm of the country since 2013, winning 67% of the popular vote on Thursday, August 16, against 32% for his main competitor, Soumaila Cisse.

This presidential elec­tion has been a pub­lic test of the government’s capac­i­ty to ful­fill its basic respon­si­bil­i­ties and con­tain the numer­ous ongoing secu­ri­ty threats that plagued these polls. Hence, turnout has been low for the 8 million registered voters in Mali, especially in the centre and north of the country, with only 43% of the population showing up to vote for the first round, and only 28% for the second.

For years, Mali’s gov­ern­ment has been strug­gling to estab­lish its legit­i­ma­cy in rur­al areas of the coun­try, both in terms of the state’s phys­i­cal pres­ence and its use­ful­ness to cit­i­zens. The polit­i­cal and secu­ri­ty situation in Mali remains still fractious and convalescent. The country has been in turmoil since Tuareg rebels and allied fighters seized the northern desert areas in 2012 before spreading their insurgency south and into the neighbouring countries of Burkina Faso and Niger despite peace efforts.

Despite the 2015 peace agree­ment, the government’s weak imple­men­ta­tion efforts, and fail­ure to include a broad­er base of polit­i­cal actors in the process, has per­pet­u­at­ed sup­port for extrem­ist groups through­out the cen­tral and north­ern regions of the coun­try. According to civil society website Malilink, 932 attacks occured in the first half of 2018 — almost double that for all of 2017 and triple 2015.

The Long Road to Koulouba

President Ibrahim Boubacar Keita was seeking a second term, with his main electoral threat coming from opposition leader and former finance minister, Soumaila Cisse, who previously lost in 2013, a landslide victory (77%) for IBK.

This year, there were 24 presidential candidates in all. Among these, the only female candidate, businesswoman Djénéba Ndiaye, ran on the slogan: “Vote for a woman, all men have failed”…

Through­out the coun­try, there was a strong feeling that Keita has not done enough to com­bat per­sis­tent chal­lenges such as youth unem­ploy­ment and inse­cu­ri­ty. Although this did not stop the voters from reelecting Keita as the head of the country, the degree of anti-government feeling that persists will no doubt keep the next admin­is­tra­tion under pressure in those areas where it needs to build more popular sup­port in the years to come.

A Presidential Election Under (Foreign) Influence

The most recent attacks led by Al-Qaeda-linked groups took place in central Mali as 40 African heads of state and government were gathering for the African Union Summit in Nouakchott, Mauritania, to discuss ways to tackle corruption and extremism.

Though the attacks exposed regional security failings, the risk posed by the extremists has paradoxically strengthened the fragile status quo and voters resigned themselves not to endanger the government’s ongoing negotiation process with the various tribes and factions. Post-election unrest too, would add a political crisis to the current security crisis and strengthen al Qaeda and ISIS affiliates in Sahel. This was not lost to Keita, whose slogan, reflecting these concerns, was urging Malians to “Consolidate the peace”…

In this context, and five years after the launch of the peacekeeping operation to protect Bamako from a jihadist invasion, the strength of the G5 Sahel force – an institutional framework composed of five Sahel countries: Burkina Faso, Chad, Mali, Mauritania, and Niger, remains key to a peaceful transition in the Sub Saharan strip.

Dedicated to the coordination of regional cooperation on economic development policies and security in West Africa, this force is being increasingly supported by the Gulf Cooperation Council, as Sub Saharan countries are working on rallying the regional bloc to the cause of counter terrorism and deradicalization. As exemplified by the recent and successful peace agreement between Ethiopia and Eritrea, the leadership in the United Arab Emirates and Saudi Arabia is more and more involved in the stabilization of the region, seen as a potential sphere of influence, to counter Iran, Qatar or Turkey as well as to build bridges with the United States or China.

Less than a week before the first round in Mali, Dubai-based ports operator DP World for instance announced it has struck a major new logistics deal, the “Mali Logistics Hub (MLH)”, not only to rebound from a series of setbacks in the east of the continent, like in Djibouti, but also to affirm itself as an ally of choice to promote development and trade on the continent.

What’s Next for Mali

For the past decade, stability has remained elusive in this part of West Africa. President Ibrahim Boubacar Keita will now have to revive the Bamako agreement signed in 2015, that did not prevent violence to tarnish this vote in the north and center of the country. Only time – and men of good will – can ensure that Mali maintains and strengthens its fragile peace. 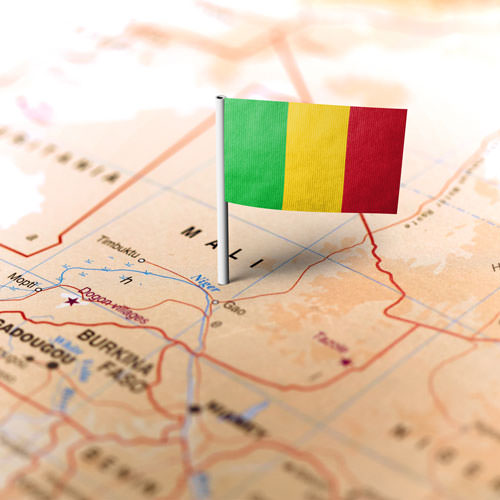