“When we exclude women, everyone pays the price. When we include women, the whole world wins.”

These were the words of António Guterres, Secretary-General of the United Nations, as the annual UN women’s summit kicked off just after International Women’s Day.

This year’s annual meeting of the Commission on the Status of Women is rumored to be an even bigger gathering than the General Assembly with more than 9,000 representatives of civil society joining government heads of state, ministers and other officials. Keeping on top of meetings is proving challenging with over 200 official side events and more than 400 parallel NGO events.

This year, discussions at the UN are focusing on “social protection systems, access to public services and sustainable infrastructure for gender equality and the empowerment of all women and girls.” And, as has been the case since 2016, there is also a focus on gender equality and the 2030 Agenda for Sustainable Development. For two weeks, discussions will range from planning urban space and public transport, with women’s safety and mobility in mind, to improving rural women’s access to skilled birth attendants.

UN General Assembly President María Fernanda Espinosa warned of a “serious regression” in the political power of women across the world in recent years as she launched the first ever High-level event on Women in Power as an official part of the Commission’s work. APCO joined senior leaders and other participants from governments, the UN system, private sector and civil society to identify barriers that hinder women’s participation and leadership and to share best practices that can accelerate women’s empowerment in this area.

And all of this in the context of the #MeToo and #TimesUp movements with constant calls for both greater accountability and better implementation of measures to protect women and girls from violence.

In comparison to other UN fora, the private sector is less visible. The Commission has been meeting every year since 1947, and it is clearly here to stay. And its work, that touches the lives of half of humanity, is clearly of relevance to multinationals, medium enterprises and entrepreneurs alike for whom women are both customers and workforce. As the UN looks to increase its collaboration with the private sector it should look at better leveraging the know-how and innovation skills it can bring to solving major issues. Likewise, companies can seek to engage with bodies like the Commission to better understand contemporary challenges, and approaches to solving them, in today’s world.

You can contact us at UNteam@apcoworldwide.com to discuss ideas about how to engage more with the United Nations.

With thanks to APCO intern Isabelle Greenberg who contributed to this piece. This piece was coauthored by Killian MacDonald. 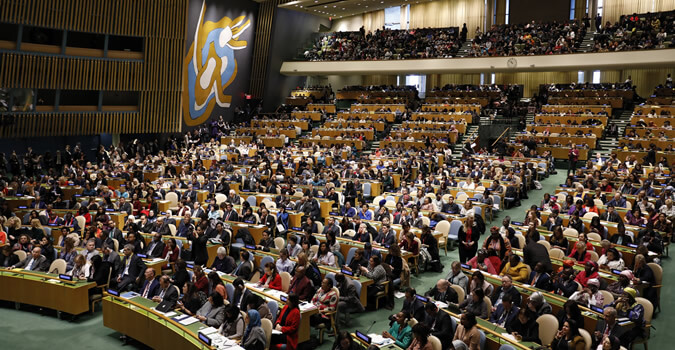