In her much anticipated speech, UK Prime Minister Theresa May today pledged that her government’s Brexit negotiating strategy will be based around building a stronger, fairer, united and outward looking United Kingdom outside the European Union. Her headline announcements included:

The speech illustrated some interesting outreach from the Prime Minister to key domestic, international and business audiences which could prove crucial in the coming months, and indeed years, ahead.

The Prime Minister placed great emphasis on her government’s desire to preserve the “special union” of the United Kingdom (including Scotland, Wales and Northern Ireland). She  championed the Joint Ministerial Committee on EU negotiations and highlighted that, with the end of the jurisdiction of the European Court of Justice, the laws of the land will be made in Westminster, Edinburgh, Cardiff and – constitutional crisis notwithstanding – in Belfast.

Emphasis on the input of these home nations may temporarily assuage the respective First Ministers, but words, as they say, are cheap. For all the talk of unity, May will have to deal sooner or later with the most belligerent of the devolved leaders, Nicola Sturgeon, who has explicitly threatened a Brexit veto – or even a second independence referendum – if Scotland does not retain special access to the single market. The Prime Minister outlined commitments today to heed the views of each of the Union’s members – but also remove the whole of the UK from the single market. In reality, she may have to settle for doing one or the other.

One of May’s more notable soundbites promised a post-Brexit Britain that will be “a country that reaches out to old friends and new allies alike. A great, global, trading nation. And one of the firmest advocates for free trade anywhere in the world.”

What the Prime Minister means by ‘old friends’ remains to be seen. Her direct reference to President-Elect Trump’s view that the UK is nearer to the front than to back of the queue for a US trade deal suggests genuine optimism in Downing Street – if not Whitehall more broadly – that the ‘Special Relationship’ may yet yield a transatlantic deal where the much-vaunted US-EU Transatlantic Trade and Investment Partnership (TTIP) has failed.

Direct mentions for China, Brazil and the Gulf States as parties interested in a UK free trade deal indicate that May considers the oil nations of the Arabian Peninsula and the so-called BRIC states – Putin’s Russia excepted – as the most promising of the ‘new’ friends. Negotiations should make for compelling viewing: May hardly got off to the best start with Beijing by delaying confirmation of the China-backed Hinkley Point nuclear programme upon arriving in office. The emerging economies will also have to navigate the many tensions which develop as they seek trade ties with a market of 65 million on the one hand, and of 443 million on the other.

It was no great surprise, after the frequent newspaper briefings in recent weeks, that May has backed the idea of a transitional deal with the EU, also favoured by Chancellor Philip Hammond and Brexit Secretary David Davis. If Brussels and Berlin are happy to oblige with May’s suggested “phased process of implementation” – whereby Britain and the EU gradually adapt to the new arrangements– this will provide UK businesses with some of the necessary stability to avoid the much feared ‘cliff edge.’

It seems likely that in certain areas – security, financial services, energy, and pharmaceuticals – the UK Government will seek to keep some sort of access arrangement in place even after the last of the transition arrangements are stripped away. A new customs agreement will also have to be negotiated, although May was clear that this will not entail full, formal membership. Associate or partial membership – or any shade of grey in between – remains possible.

Today’s speech will go some way to addressing claims that the Government lacks even a basic plan for Brexit. But it also prompts as many questions as it does answers: how can harmony be maintained at home as negotiations go on overseas, which nations will be willing to strike trade deals, and which sectors will win the battle for market access? The Prime Minister may have an idea of the answers to some of these questions by the time Article 50 is triggered in March – but don’t count on her sharing them any time soon. 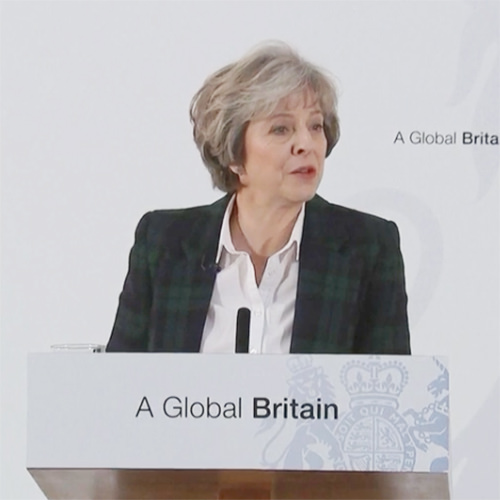