Tectonic Shifts Between the Gulf and Africa
Overview

With 10 African heads of state, 74 ministers and dignitaries and a total of 6,000 attendees, the conference admirably fulfilled its goal to “bring Africa to Dubai, Dubai to Africa and Africa to the world” and provide a shared platform to intensify intercontinental trade and investment.

As a growing number of governments across Africa take an interest in the success of Dubai to emulate its model, Gulf countries in turn are lining up to become springboards and gateways into the African continent.

The elephant in the room at #AGBF2017 was of course the political situation in Kenya, with the country still being embroiled in an electoral quagmire.

By far the greatest concern for investors remains political risk, given the widely recognised importance of long-term government stability alongside other key factors such as structural transformation, basic services and adequate local skill bases.

Corruption remains a huge problem in Africa. This is exemplified by the case of South Africa, a country that until recently had the most powerful and prosperous economy on the continent. The corruption and economic mismanagement by the ruling ANC in South Africa has had a destructive effect on the economy, the most visible sign of which is a decrease in the disposable income of all South Africans. Many South African companies, particularly those in the retail, finance and telecoms sectors, have significantly increased their offshore business activities, in both Africa and the more traditional European and Eastern markets.

According to the United Nations Economic Commission for Africa (UNECA), infrastructure development alone could increase the continent’s per capita economic growth by two percent per year and increase the productivity of firms by as much as 40 per cent.

While a majority of French companies operated in West Africa due to linguistic preferences, more and more multinationals are now investing in this part of the continent. These new actors feature numerous GCC-based companies, reflecting the Gulf Countries’ expertise in developing infrastructure, airports, ports and communications networks.

Indeed, it is worth noting that Gulf organisations actually provided $15b for African infrastructure projects from 2004 to 2014. For example, the UAE’s DP World – the third largest ports operator in the world – manages ports in Mozambique, Egypt, Algeria, Somaliland and Senegal; the last of these includes the ongoing development of a logistics free zone near the Senegalese capital, Dakar.

Sub-Saharan Africa also attracted an additional $2.7b in FDI from the GCC in the first half of 2015 – the largest influx of capital in any year to date as per Dubai Chamber figures.

For GCC countries, the Horn of Africa and East Africa are increasingly important hubs for manufacturing as costs in Asia and China grow. Ethiopia, for instance, now cited as a top investment destination in the African continent, is leading the pack with its population of 100 million inhabitants and emerging as an industrial and manufacturing power-house. Rwanda is also now gaining a favourable reputation for the ease of doing business while its government pushes for panafrican free trade integration. Djibouti, which is set to host a new Saudi Arabian military base on its territory, is also currently pushing through reforms to cut red tape and streamline customs and administrative procedures.

However, serious challenges remain in some countries relating to weak legal and regulatory frameworks for sectors such as banking. These shortcomings have affected some investments from the Gulf. For instance, UAE telecom giant Etisalat recently pulled out of Nigeria, losing its 14 percent telecoms market share in the country, due to a profit margin of only one percent compared to an average of 27 percent for the company’s UAE operations.

For most investors, Africa, with its many untapped opportunities, represents the last frontier; the only continent where local economies can still promise double-digit growth.

Yet, a conference on Africa wouldn’t be complete without mentioning China. As interest in this new African frontier grows, China’s shadow looms more and more heavily over the continent. Already, through its new Silk Road, the Middle Kingdom is weaving a web of ports around the continent in the same way it is surrounding India with new alliances, bilateral agreements and strategic investments, easy short-term debt financing and new trade routes.

The risk for the GCC? To end up deprived of African goods and resources flowing out of the continent on a new “conveyor belt” straight to mainland China…

The opportunity for Africa? To take advantage of this geopolitical turning point to push for a true panafrican integration and a common market, to bet heavily on education, energy, agriculture and digitization to lift the continent, and ultimately speak as one voice among the giants. 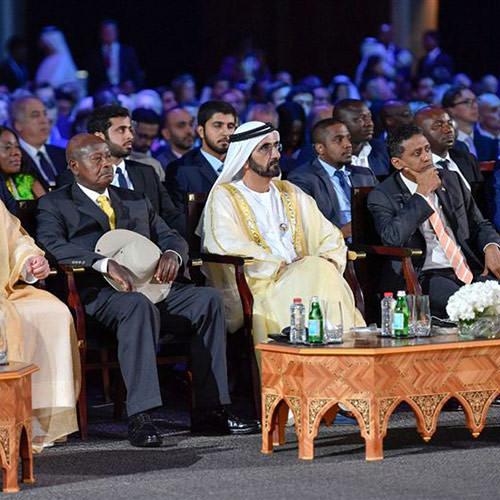