As UK Prime Minister Theresa May was battling with changes in her Government late into the evening of Monday 9 July, after both her Foreign Secretary and her Brexit Secretary resigned in protest over her ’soft’ Brexit plans, it was confirmed that Matt Hancock would step into Jeremy Hunt’s shoes as the new Secretary of State for Health. This is a formidable rise for the former Digital, Culture, Media and Sport (DCMS) Secretary, taking the helm of one of the most challenging offices of State, and having to follow the longest serving Health Secretary in history.

Hancock takes over the Health brief just weeks after his predecessor was able to secure a long-term financial settlement from the Prime Minister. The £20 billion ‘70th birthday present’ means the £114bn budget will rise by an average of 3.4% annually – but that is still less than the 3.7% average rise in real terms that the NHS has had each year since 1948. As a result, the new Health Secretary will have a busy summer finalising the long-term NHS plan which will outline how this money will be spent, as well as being furled headlong into the thorny issue of social care funding, which the new settlement does not touch.

However, Matt Hancock may also be able to deploy his knowledge of all things digital – a key aspect of making the NHS fit for the future, given his biggest achievement at DCMS was the implementation of his Digital Strategy. This after all set out how to make the UK the best place to establish and grow digital businesses and create a secure online place for citizens. Hancock is known to be a keen supporter of free flowing, yet secured digital solutions, and Jeremy Hunt said in his welcoming remarks that Hancock is likely to be the ‘best person’ to take the NHS digital agenda forward.

Having experience in the digital arena could help him implement some of the largest NHS’ digital ambitions. He is likely to push the NHS to become digitally ready for the future which could transform (and make more cost effective) the way health care is delivered in the coming years. One of the commitments left unfinished by Jeremy Hunt was shifting the NHS to become ‘paperless’ by 2018. Accomplishing this goal would help to improve access to services online, shorten waiting patient times and make the overall system more efficient.

Using data and technology to transform health and care for patients and citizens was a goal of the government’s strategy on ‘Personalised Health and Care 2020’, which Hancock is likely to continue. The ability to collect, aggregate and analyse data generated by the NHS, which could be used for clinical trials and to develop innovative therapies, is key for life sciences researchers and industry alike. Only time will tell if Matt Hancock becomes a Secretary of State who is better able to make the NHS a testing ground to improve both the health and wealth of the nation as he draws up the detail and possible legislation to underpin the NHS Long Term Planning process this summer.

Hancock has a steep learning curve if he is to be taken seriously in such a prominent role. Being Health Secretary is a massive step up from DCMS. Not only will he have to be ready to handle a possible no-deal Brexit and the plethora of implications this will have from workforce, procurement and supply perspectives, but he will also need to engage in future dialogue on how to bring NHS and social care funding together. No one has managed to achieve this yet and the calls from all sides are becoming louder at the same time as Brexit fuels long term economic uncertainty. The solution may require a fundamental change to the way social care is funded in the UK, which was shown at the previous General Election to be a hugely contentious issue with the electorate.  Fortunately for him, this is something the general public seem open to discuss.

Hancock’s experience working for former Chancellor George Osborne gives him good insight into the thinking and mindsets within the Treasury, a key hurdle he will have to encounter. Equally as important will be making an ally out of the de-facto NHS CEO, Simon Stevens, who is an old hand at getting what he wants from Treasury. This relationship will be essential if they are going to be able to deliver an increasingly productive yet efficient NHS, within the confines of a funding agreement made without Hancock being at the negotiating table, without impacting front line service delivery.

As a young and technologically knowledgeable Secretary of State he is likely to be a moderniser, but he must balance any reforming zeal with the risks of an Andrew Lansley-esque top down ‘re-disorganisation’ which would put him firmly in the crosshairs of an already disenfranchised and demotivated professional workforce. However, the power of new technology and digitalisation is such an important part of this future digital health care economy that, on paper at least, he looks well suited to catch Jeremy Hunt’s hospital pass. He just needs to take the professions, parliament, industry and the baying public with him in short order. That’s quite a pill to swallow. 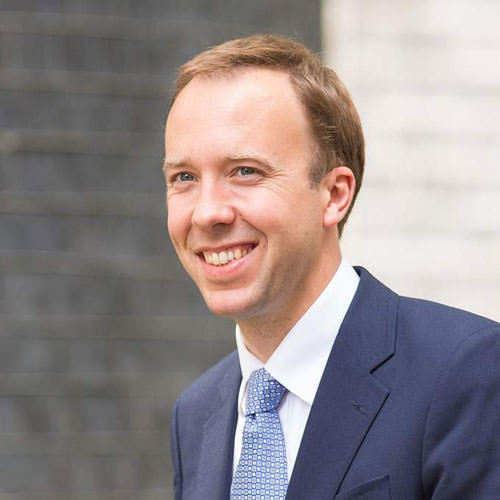