The real winner in the first round of the French presidential election was the National Front, France’s Far-Right party that has traditionally been relegated to the sidelines of the French politics. For only the second time in the history of the Fifth Republic, the National Front will be represented in the second round of the French presidential election. And unlike in 2002 (when a Republican Front of right and left wing parties united behind the mainstream right-wing candidacy of Jacques Chirac to defeat Jean-Marie Le Pen), this year’s final round of the presidential election on May 7th will force voters to choose between two non-traditional political parties: Emmanuel Macron’s optimistically centrist movement created barely one year ago and Marine Le Pen’s more mainstreamed version of the Far-Right party founded by her father in 1972.

Although finishing in second place behind Emmanuel Macron during the first round of the presidential election, Marine Le Pen’s qualification for the final round signals the increasing influence of the French Far-Right and underscores the growing popularity of populist movements that have recently achieved unexpected victories in the British referendum to leave the European Union and the American election of Donald Trump. These unexpected electoral results are also reflected in an English-language landscape analysis of traditional (not social) online media coverage of Macron and Le Pen, where coverage of the French election reveals the full extent to which the English-speaking press has been traumatized by Brexit and Trump. 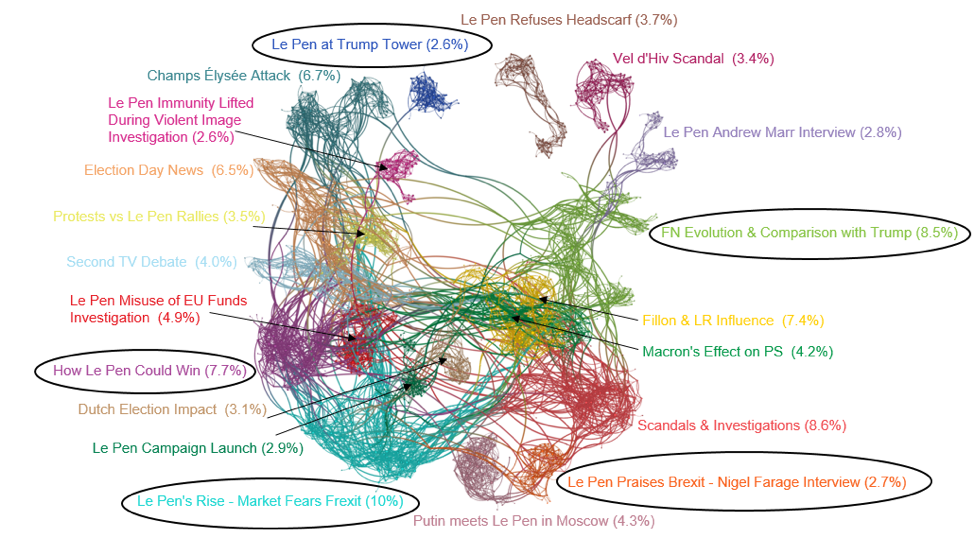 Using natural language processing, the above cluster chart groups nodes of online articles and blog posts based on the similarity of their content. The largest clusters of Anglophone coverage focus on the economic and political fears of key business and political leaders in the U.K., U.S., Canada and Australia should Le Pen win the French election and steer France away from the European Union. There are numerous comparisons between Le Pen’s unexpected rise in the polls and the also unexpectedly successful U.K. Leave (Brexit) and Donald Trump campaigns.

Le Pen is featured in headlines four times more frequently than Macron, mirroring the earned media advantage enjoyed by Donald Trump during the 2016 U.S. presidential election. Le Pen also seems to employ a similar media strategy to Trump when confronted with controversy during her campaign: whenever there is unfavorable press coverage of her candidacy, Le Pen quickly shifts the media’s attention by making some bold, public statement.

The French Far-Right are much more than any single candidate, however. Just as the Alt-Right’s influence in the United States has grown following the election of Donald Trump (see: Steve Bannon), the French media has also documented the growing influence of French Far-Right groups and their online activities (links in French). Unlike the Alt-Right in the United States, the French Far-Right enjoy a significant organizational advantage stemming from the longevity of Le Pen’s National Front party and its ability to win local elections. And after Marine Le Pen’s victory last weekend, these Far-Right communities will exert an increasingly significant influence on policy discussions during the next five years –while the traditional French political parties struggle to rebuild their base after a stinging defeat and chart a course forward for their political survival.

To better understand the French Far-Right as a movement beyond Marine Le Pen’s candidacy, we analyzed the online audiences of two prominent and influential Far-Right Twitter accounts in France: Français de Souche and Boulevard Voltaire. These two websites are designed to look like news-aggregation content hubs, but the articles shared are markedly one-sided and frequently engage in nationalistic, xenophobic and anti-establishment rhetoric characteristic of the French Far-Right. The following audience analysis identifies the relationships between people (represented by nodes) who follow either one of these two Far-Right sites according to their affinities (shared commonalities). Based on the affinities between members of these audiences and the other Twitter accounts that they follow, followers of these two Far-Right outlets can be grouped into several specific audience clusters: Sports Fans, National Front Identity Nationalists, Journalists/Politicos, National Front Supporters, Militant Catholics, Right-wing Retirees, Young Nationalists and Frexit Supporters. 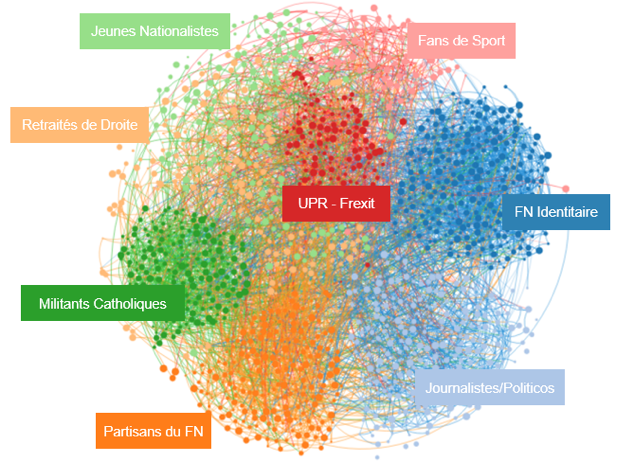 People who follow these French Far-Right outlets on Twitter are much more likely to support Marine Le Pen (bio keyword: #Marine2017) and express disdain for traditional establishment parties. Members of the largest audience cluster – National Front Identity Nationalists – define themselves above all through historically-rooted conceptions of French national identity.

Top location given by members of the National Front Identity Nationalists cluster: Kingdom of France

Throughout the French presidential campaign, this audience also consistently co-opted trends pioneered by the American Alt-Right during the Trump campaign by adopting them to uniquely French contexts.

Left: Using a Trump campaign slogan to express nostalgic nationalism.
Right: “#TheTrueMacron is a pawn of the European Union and a globalized France – [he is] a traitor to France.”

Regardless of who wins the second round of voting May 7, the qualification of the National Front for the final vote has ensured that the French Far-Right will play a critical role in agenda setting key policy discussions for the next five years. By analyzing trends in the social content this online community has shared during the campaign, we can begin to predict the most salient issues this party will champion during the coming legislative sessions, namely: security/terrorism (security funding, immigration policy, foreign intervention), protectionism/globalization (economic reforms, relationship with the European Union, international trade agreements) and French national identity – a theme that is sure to characterize almost all political issues during the next five years.

Left: “My only weapon against terrorism is ready for tomorrow.”
Right: “Marine Le Pen: ‘In order for our country to prosper, our economy must be free and independent.’”

Left: “Marine Le Pen: ‘Our fight is for our identity and therefore for our sovereignty.’”
Right: “This election is primordial. Our customs, our way of life, our identity depends on it.”