On April 28, China’s legislature, the National People’s Congress, passed the Foreign NGO Management Law (Chinese/English), the third draft of a law which had already received widespread criticism for moving foreign NGOs operating in China from the jurisdiction of the Ministry of Civil Affairs to the Ministry of Public Security (MPS), China’s police and security authority. In addition, the law stipulates that foreign NGOs in mainland China “must not endanger China’s national unity, security, or ethnic unity” (Article 5). This inherent view of foreign NGOs as potential threats to national security has raised concerns among foreign communities that foreign NGOs will face increasing obstacles operating in China and will be subject to even stricter controls.

The Chinese government and media, though, have defended the law as an effort to build up China’s legislative system for foreign NGOs, protect the rights and activities of foreign NGOs in China, and create a two-way street in communication between foreign NGOs and their regulator in China.

How should multinational companies and NGOs operating in China interpret the passing of this law?

A Look at the Law

The government has yet to release their planned follow up implementation guidelines, including an activities catalog, a list of professional supervisory organizations (PSUs) able to “host” foreign NGOs, and registration application procedures, before the new law goes into effect in January 2017. These documents will be key factors in determining the environment for foreign NGOs operating in China. Here is what we know thus far:

Uncertainties such as the number and type of PSUs as well as how the fundraising and member recruitment bans will be implemented are big question marks for the nonprofit community in China.

Intertwining Motivations behind the Law

The Bottom Line for NGOs and Business: A Silver Lining to a Dark Cloud?

Though there is still deep ambiguity for NGOs as to how the law will be implemented on a practical level, the law clearly demonstrates an overall trend of tightening of foreign parties under Chinese President and Party Chairman Xi Jinping. Recent laws, including the National Security Law and the Anti-Terrorism Law, similarly emphasize national security concerns, and strive to ward off foreign interference. However, foreign NGOs in China have always faced a certain element of risk. A silver lining to the law for a foreign NGO in China now is that there is a new opportunity to communicate with regulators and shape their perception of your organization, in other words “to be registered is to be recognized.”

The MPS will face a steep learning curve as it figures out its new role including how to coordinate the numerous agencies that will work together to supervise foreign NGOs. In addition to aligning with government efforts in domestic philanthropy to develop talent, establish appropriate regulations, and incentivize giving (as outlined in the domestic Charity Law), foreign NGOs may be able to shape the implementation of the law through dialogue and education to meet the needs of the Chinese government as implementing guidelines are rolled out.

As for multinationals operating in China, the implementation of the law will be essential to follow as it will have implications for a range of business-NGO interactions and partnerships. For example, one major impact will be for multinationals with corporate foundations who will now need to decide whether to set up a legally registered representative office in China for the foundation or conduct activities on a temporary basis. If the latter is chosen, there may be a Foreign Corrupt Practices Act (FCPA) concern with the law’s requirement that expenditures go through a Chinese Partner Unit. The law is also silent on whether wholly foreign-owned enterprises (WFOEs) set up by foreign nonprofits will have to be re-registered under the law.

Industry associations also face many uncertainties as they register with the MPS and determine whether the ban on membership recruitment will affect membership in China. Critics raised questions over the inclusion of foreign schools, hospitals, research institutions, and academic organizations in the second draft; the final law seems to remain purposefully vague stating in a supplemental clause that these entities are to “follow and comply with the relevant regulations and rules of the state.” (Article 53). Notably, the clause refers only to instances of foreign schools cooperating with Chinese schools, foreign hospitals with Chinese hospitals, etc., and remains vague on other types of cooperation.

In many ways, the Foreign NGO Management Law is yet another tool in President Xi Jinping’s toolbox as he focuses on solidifying political control and social stability through an anti-corruption campaign and a clampdown on civil society, as argued in a previous APCO think piece. This is the New Normal that foreign entities face in China. To survive, foreign NGOs and multinationals must think creatively and proactively about how to educate and engage with stakeholders in this new environment.

This post was written by APCO alumna Lilian Rogers. For more on NGOs in China, please take a look at this video featuring Teresa Lu: 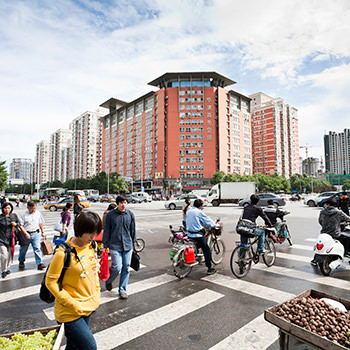