The annual meetings of the Chinese People’s Political Consultative Conference (CPPCC) and the National People’s Congress (NPC)—collectively known as the “Two Sessions”—took place between March 4 and March 11.

China is confronted with a series of complex challenges in 2022, from sporadic local COVID-19 outbreaks to weak consumption growth and external tensions. The upcoming 20th Party Congress makes addressing these problems a matter of even greater urgency. As a result, stability emerged as the paramount priority for the government at this year’s Two Sessions, with the Government Work Report and the speeches of senior legislators repeatedly underlining its importance.

The focus on stability did not forestall the return of an ambitious annual GDP growth target—set at about 5.5%—nor neglect other priorities, with increased stimulus measures expected to support the objectives of the 14th Five-Year Plan (2021-2025), including support for Micro, Small and Medium Enterprises (MSMEs). Praise for the “effective and quick” suppression of local COVID-19 outbreaks also reinforced expectations that China’s stringent pandemic controls are unlikely to change in the near term.

The government emphasized its commitment to long-term reform initiatives, such as indigenous innovation and digitalization. China will also continue to implement policies aimed at achieving “common prosperity,” despite the fact that this year’s government reports carried few direct references to the term. However, unlike last year, energy intensity will not be subject to a specific target but will instead be assessed with “appropriate flexibility,” though China’s long-term climate goals remain unchanged.

What Multinationals Need To Know

Read APCO’s full analysis of the 2022 Two Sessions, including sector-specific analysis and foreword by James McGregor, below and click here to download a copy. 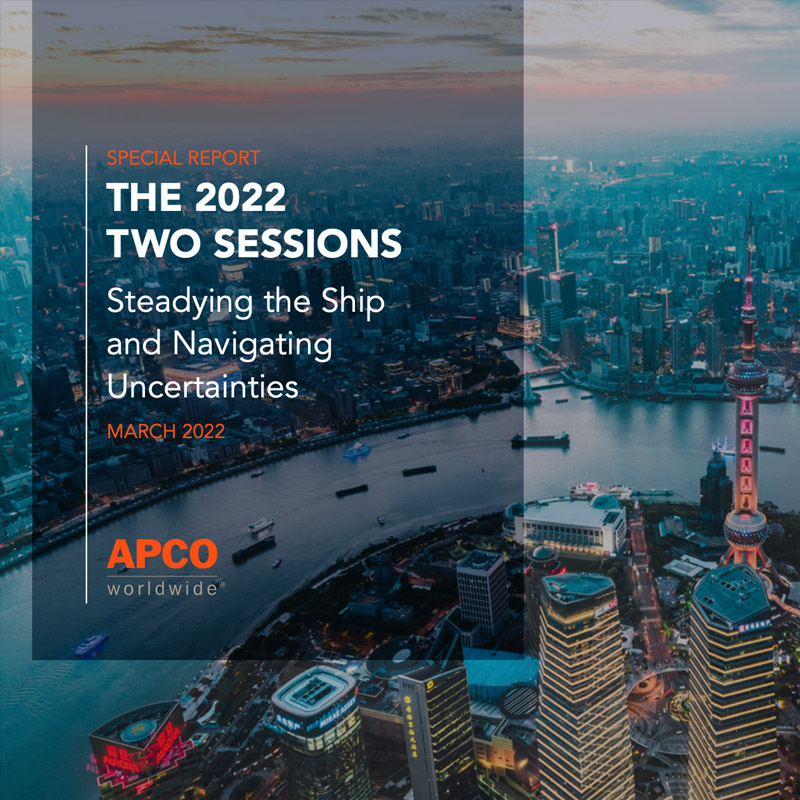