President Xi Jinping maintained the China International Import Expo (CIIE) was “not China’s solo show… but a large chorus of nations.” The state propaganda machine spared no expense on propagating this message, swamping the internet with positive reporting through sheer numbers of English language articles, paid content and social media. Sources on the ground, however, tell a story of incompetent organization and even coercion tactics in the leadup to the “big show.” It seemed to many participants that this was far more to do with putting on a display of pageantry than it is about trade.

The inaugural CIIE was held at the National Exhibition and Convention Center in Shanghai from November 5-10. First announced by President Xi Jinping in 2017, the CIIE aimed to expand Chinese imports of international goods and services and increase foreign investment in the country under the banner of “New Era, Shared Future.”

The Expo convened over 3,600 leaders from business, government and international organizations to showcase their latest technologies, products and services to more than 400,000 domestic and international customers. Exhibitors from over 130 countries were represented at the event.

In a keynote speech delivered at the opening of the Expo, Xi Jinping outlined a series of reforms meant to strengthen China’s global economic engagement. Yet, amid growing international pressure to deliver concrete measures to reduce market barriers for foreign enterprises, Xi’s words and even the astonishing total of $57.83 billion in intended deals signed for the year ahead failed to impress many foreign participants.

What People Are Saying

Xi’s speech also discussed the Chinese economy at length, with Xi drawing particular attention to China’s current economic challenges and difficulties. The Nikkei Asian Review noted that Xi’s discussing the economy in detail was unusual, as such topics are typically discussed by Premier Li Keqiang.

The trade war was undoubtedly the elephant in the room, with The Washington Post writing that Xi’s message was directed to “an audience of one” in the Oval Office. Without mentioning the United States or President Donald Trump by name, Xi declared that “the laws of the jungle and winner take all are a dead end.”

The Wall Street Journal found that while over 180 American companies were represented at the event, many did not send their CEOs and instead dispatched regional chief representatives, suggesting that international business executives are being cautious amid heightened trade tensions.

Chinese state media heaped praise on the CIIE. Xinhua reported that the expo will “inject certainty and stability into the world economy” at a time when protectionism threatens growth. Elsewhere, party tabloid Global Times wrote that the CIIE should cause “U.S. politicians bent on pressuring China to rethink their economic policies.”

Domestic media paid little attention to the plethora of deals signed, focusing instead on the exotic products available for China’s rising middle class. A reporter from Sina Finance (Chinese) likened the expo floor to “a supermarket of 10,000 nations,” a physical manifestation of economic globalization. Shanghai’s The Paper (Chinese) reports that thousands of new international food options, from Spanish ham to Ethiopian coffee, allowed shoppers to achieve their pursuit of a better life.

Yet, international coverage expressed disappointment in China’s repeated market opening promises. The New York Times argued that Xi’s central challenge remains whether he can convince the world that China will follow through on now oft-repeated reform promises. The EU Chamber of Commerce was blunt: all talk and no action has “left the European business community increasingly desensitized.”

Bloomberg reported that China’s state-owned enterprises figured heavily in the $57.8 billion worth of deals signed at the event, suggesting a heavy state hand in elevating the commercial optics of Xi’s signature CIIE.

Many of the signed deals were ones that had already been contracted prior to the event, suggesting that MOUs were theatrical rather than substantive. Reuters cited one foreign business representative who said that everything at the CIIE’s signing ceremonies were “theater or farce.”

Despite the mixed reception to the event, China Daily announced that over 200 companies were already signed up for 2019 iteration of the trade show.

Against the backdrop of domestic economic headwinds, an intensifying trade conflict with the United States, and global criticism of China’s outsized trade surplus, the CIIE strived to communicate to the global business community that China is more committed than ever to opening its market for business. The major event also afforded Xi and the Chinese leadership a stage to demonstrate commitment to the multilateral trading system, economic liberalization, and overall market reform.

Nowhere were these pronouncements clearer than in Xi’s opening keynote speech, which he used to project China as an advocate of multilateralism and reiterate the country’s promise to broaden market access and improve the business environment for foreign companies. However, many of these promises fell on deaf ears; Xi has long made similar pronouncements on the event circuit, from his 2017 Davos speech to the April 2018 Bo’Ao Forum for Asia. Xi speech fatigue has set in for many global business executives, and the CIIE did not do much to restore business confidence in what Xi described as the “ocean” that is the Chinese market.

Perhaps more important for Xi was the opportunity to demonstrate that China’s economy is rebalancing away from export-led investment in manufacturing and towards domestic consumption of high-tech goods and services. From sensor-enabled security gates and lavish exhibition halls to $57.83 billion of intended deals, the optics of the major trade event reflected China’s readiness for a new era of economic growth, with domestic consumption officially touted as the key driver.

If little was offered in terms of substance, officials tried to make up for it in style. Companies shrewdly played along, “kissing the ring” to be seen and counted in front of the all-powerful leadership. Most, if not all, the deals were already agreed on and the signing ceremonies merely for show. Foreign actors were hired to lend an international face to the proceedings, and foreign companies were pressured by state media for positive quotes. Worse, many felt they were treated as mere exotica for the Chinese audience and, perhaps most importantly, for Xi himself. In doing so, China’s heavy-handedness may have put off the very partners they intended to woo.

As the self-congratulatory pat on the backs continue post-CIIE, one asks just what was it all for? On one hand, the expo reflects the government’s efforts to emphasize China has turned a corner on its reform process, characterized by increased consumption of foreign goods and underpinned by a commitment to the global economic system. However, as the orchestrated business deals and MOUs made clear, this new phase of reform will continue to be state-led, with opening occurring only on Xi’s terms.

Of course, the CIIE allowed foreign companies to display their alignment with government goals, but will these signs of almost feudal fealty be met with fairer policies? Or will they be trampled underfoot by local government bureaucrats, eager to please Xi under a new era that is literally named after him?

Moving forward, the international business community should monitor if and how Xi translates his words into action. 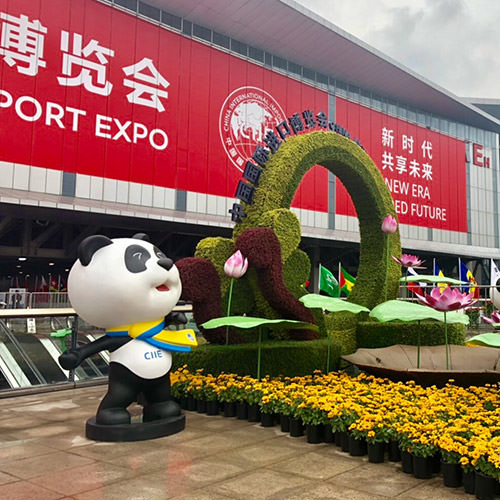