A digital analysis of Americans’ perception of Emmanuel Macron. Read more from this series here.

Emmanuel Macron’s recent state visit to Washington was a key moment in a presidency that has been characterized by a rupture of the status quo in nearly every domain of French politics. Marking the first-year anniversary of Macron’s first term in office, APCO is presenting a series of articles that examines the major political themes of his presidency on national, regional and international levels.

Emmanuel Macron’s official visit to Washington was the latest example of a diplomatic gambit often described in the media as a “bromance” with his American counterpart. Since taking office, Emmanuel Macron has played the role of a loyal and affectionate friend aiming to keep the special relationship between France and the United States going strong, all while trying to convince Donald Trump to maintain a multilateral approach to international relations.

During his recent State visit, Macron continued this strategy by using his ability to confidently express himself in English, together with his strong social media presence, to both showcase his intimate relationship with Donald Trump and to directly communicate his more cooperative approach to international relations directly with the American public. Consequently, many Americans are now familiar with Macron’s political opinions and are keenly following his interactions with Donald Trump. Even if this “bromance” has so far failed to accomplish President Macron’s desired diplomatic objectives, Macron has nevertheless succeeded in capturing the imagination of the American people and has subsequently bolstered the reputation of his country.

Digital Analysis: How is Emmanuel Macron perceived in the United States?

To better understand what Americans think of the actions of the French president, the following analysis breaks down the narrative structure of media coverage in the United States during the first year of his presidency. In the graphics below, we have used Natural Language Processing software to organize conversations in both online and social media according to their primary thematic concentration.

Throughout the first year of his presidency, the French president has been the focus of thousands of articles in the American media. These articles are grouped around two major categories: towards the top of the below graphic, articles primarily focus on the special relationship between France and the United States, including the recent disagreements over the Paris climate accord and the Iran nuclear deal; towards the bottom of the graphic, articles mainly cover the 2017 French presidential campaign and Emmanuel Macron’s electoral victory. In the center of the graphic are three close-knit topics extremely important for the American public: 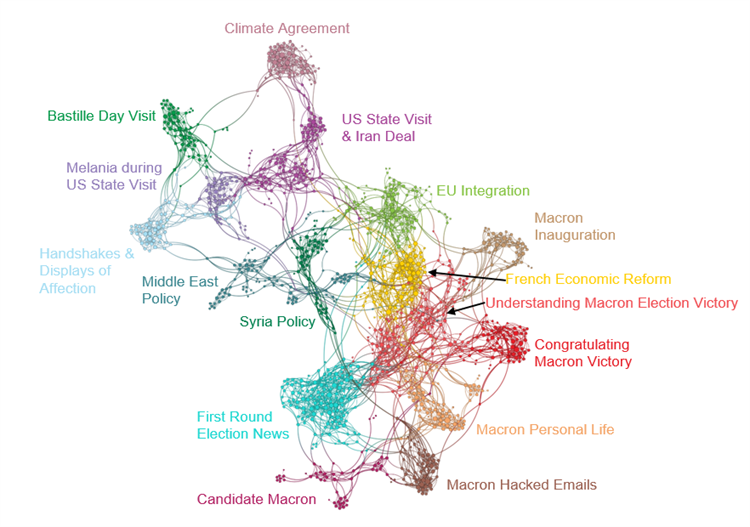 Articles mentioning “Macron” during the first year of his presidency. In this graphic, each node represents an article published online in the United States; similar articles are grouped together. Sample size: 1,313.

These three topics represent the general American view of Macron’s strong leadership in domestic and international affairs, especially with regards to his vision for France, the European Union and the world.

Macron’s multilateral vision of international relations starkly contrasts the French president with his American counterpart. In fact, the contrast between the two presidents is evident throughout this media analysis; 43% of the articles mentioning Emmanuel Macron do so while also referencing Donald Trump.

The juxtaposition of Trump and Macron is even more prominent towards the top of the above graphic, where the major issues and personal interactions surrounding the special relationship between the two countries are closely followed by the American press. Three subjects in particular are followed the most closely by American readers: the Syrian conflict, the Iran nuclear deal and the Paris climate accord.

During his first year in office and during his official visit to Washington, Macron has prioritized these three subjects when interacting with Donald Trump. Further, Macron’s opinions on all three issues are often on display when he directly addresses the American people on Twitter. To further expand our online media analysis, we captured over two thousand American-authored tweets posted in response to approximately 45 English-language tweets that Macron published during his first year in power. These tweets reveal Americans’ reactions to Macron’s English statements made as he confronted the three subjects most critical to the relationship between both countries.

In the below graphic, the majority of the replies to the French president’s tweets are positive and thank Macron for his multilateral efforts, above all related to the Paris climate accord and the Iran nuclear deal. In general, the authors of these tweets are impressed by the leadership demonstrated during Macron’s official visit to the United States and perceive his political philosophy to be a credible alternative to the unilateral tendencies of the American president.

A majority of Americans currently do not approve of President Trump’s policies, and it is from this segment of the American population where we see the most interaction with Macron’s tweets. This disapproval is evident in the center of the below graphic, where American tweets articulate a desire to move to France, a perception that Macron speaks the truth and a general admiration for the behavior of the French president during his stay in the United States. 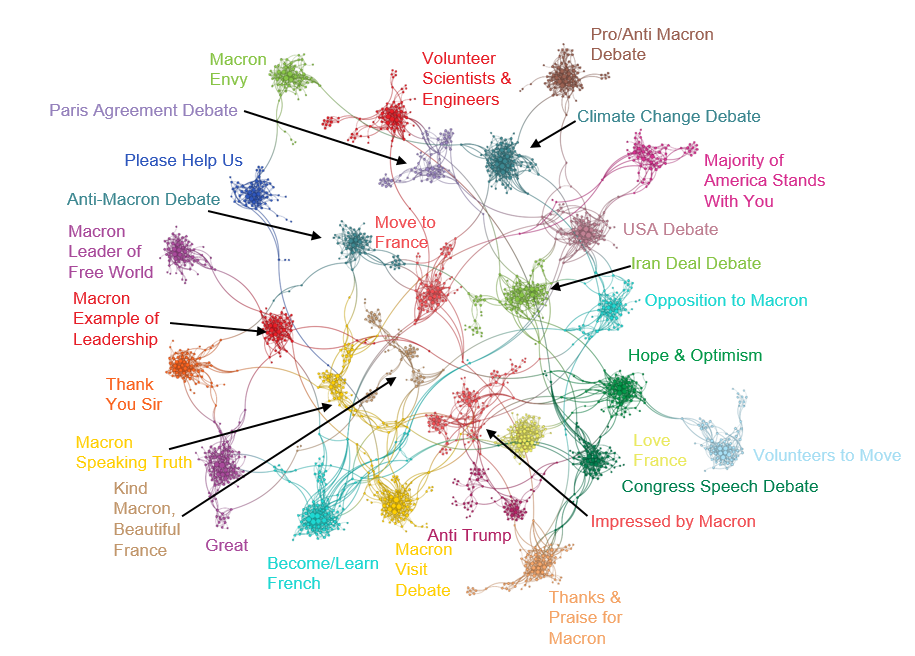 American tweets in response to approximately 45 English-language tweets published by Macron during the first year of his presidency. In this graphic, each node represents a tweet; similar tweets are grouped together. Sample size: 2,045.

Even though the diplomatic efforts of the French president did not succeed in convincing Donald Trump to remain in the multilateral agreements around combatting climate change and preventing Iran from developing nuclear weapons, our analysis indicates that his leadership is generally very positively received in the United States. The Macron-Trump relationship, although sometimes awkwardly viewed given the recent French diplomatic failures, nevertheless represents a new special relationship between France and the United States, characterized by a remarkable understanding between two leaders who hold clearly diverging political opinions. It is of course possible that this “bromance” will someday pay off, but for now the French president can effectively use his special status with the United States to communicate directly to the American public. Indeed, beyond any other objective, Emmanuel Macron seeks to personify a liberal and radical political alternative that many Americans, opposed to Trump’s America-First policies, admire and support.

Timeline of a French president as seen by Americans

Emmanuel Macron was elected only a few months following Donald Trump’s inauguration, and a public shocked by the controversial American election immediately began comparing the two men. On the one hand, they were both described as political outsiders who succeeded in defeating established political parties. On the other hand, the differences between the two presidents couldn’t be more apparent: contrary to Trump, Macron was seen as young and innovative, reminding many people of the dynamism displayed by the similarly young President Obama; he lauded the virtues of multilateralism; and he considered climate change to be a major challenge that the international community must urgently cooperate to solve. 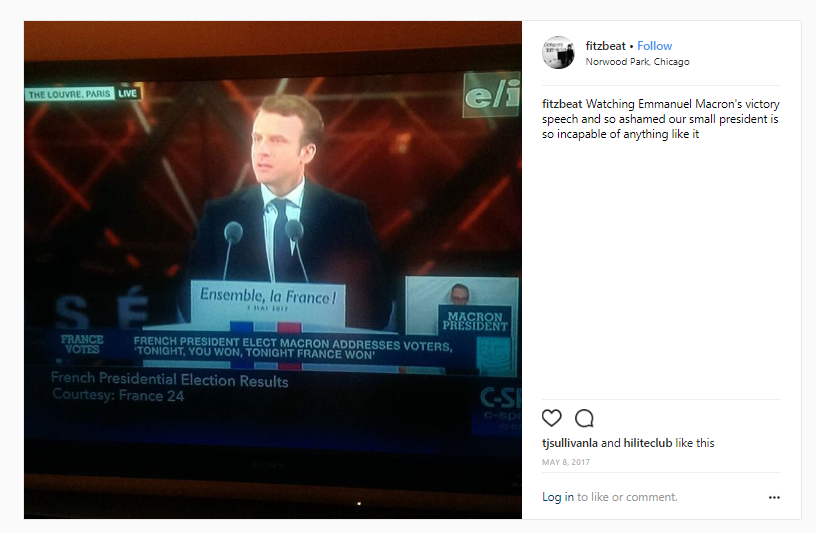 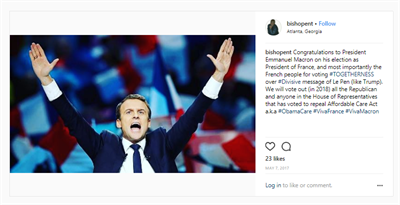 Less than one month after Macron’s election, the new French president had to react to the White House’s announcement that the United States would abandon the Paris climate deal. Macron, without hesitating, immediately critiqued this decision.

The same day, Macron went even further, calling on scientists, engineers and responsible citizens to come to France where his government would support any and all efforts to fight against climate change. He even appropriated Trump’s famous slogan, instead reminding Americans of humanity’s collective responsibility to “make our planet great again.” 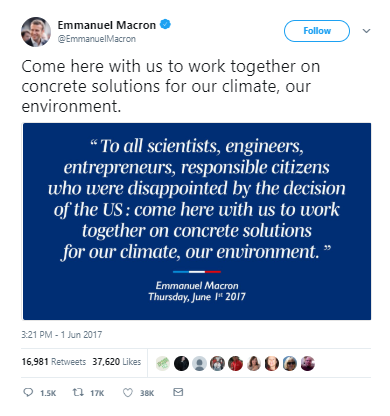 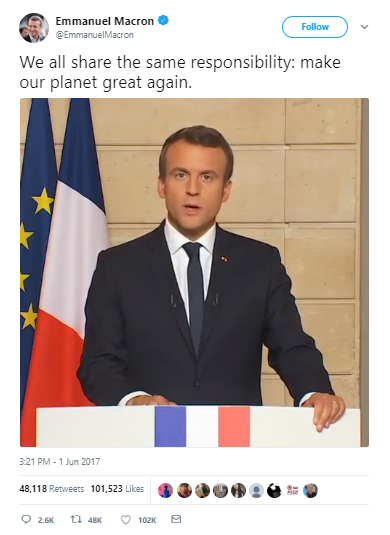 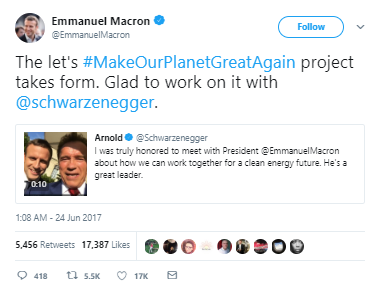 Despite the disagreements between the two Presidents, Macron invited the American President and his wife to witness the military parade in Paris held in honor of France’s national celebration on July 14. Trump loved the spectacle so much that he immediately expressed his own desire to host a similar military display on the streets of Washington. 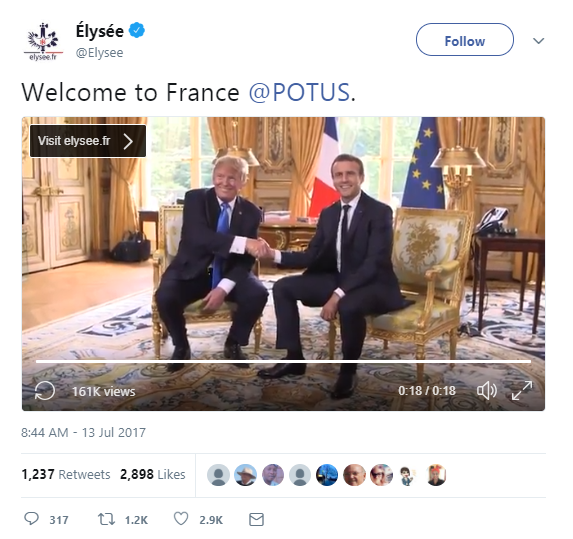 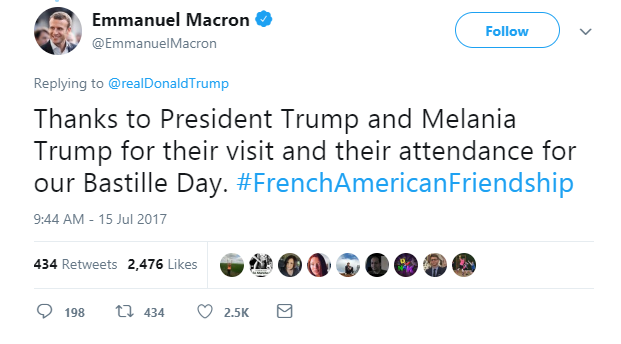 The French President also showed himself to be a master communicator whose understanding of symbolism was on full display while he exchanged gifts with the Trumps and spoke at historical monuments important to Americans, where he made sure to address his audience in English. 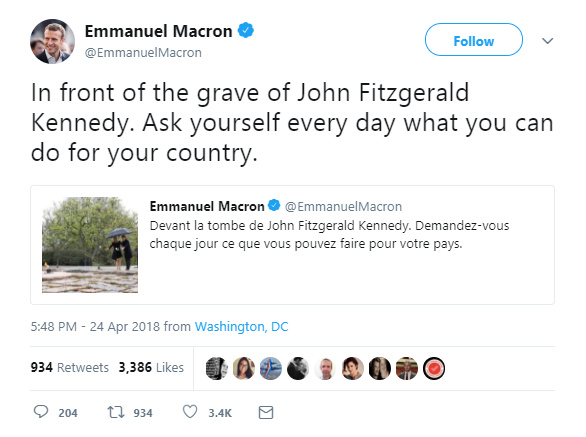 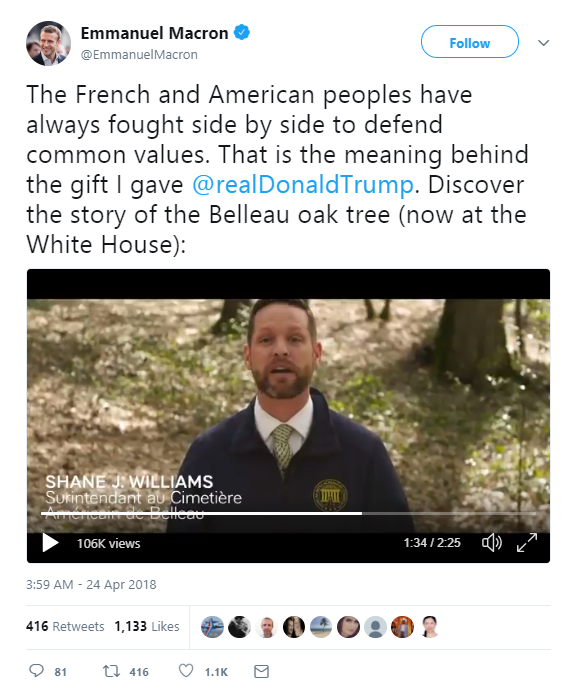 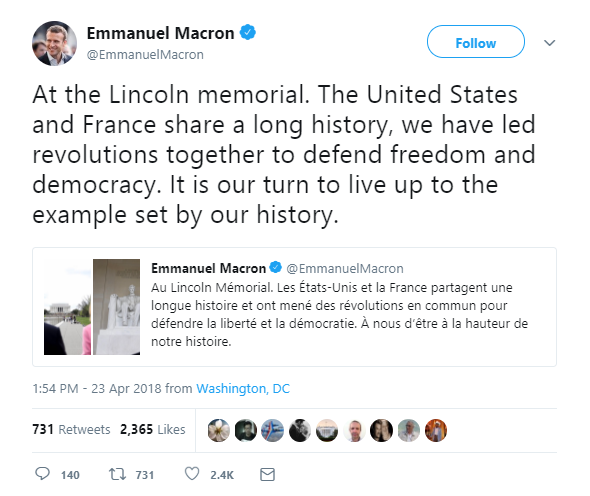 Only a few days after departing Washington, the French President was snubbed again when Trump announced that the United States would withdraw from the Iran nuclear deal. Macron immediately announced that he would work with Russia and the other signatories of the deal in an effort to preserve it.

The American President also continues to threaten the global economy by announcing his desire to place restrictive tariffs on the importation of steel and aluminum to the United States. His announcements have sparked strong opposition in both Europe and in France, with Macron calling for “free and fair trade.” 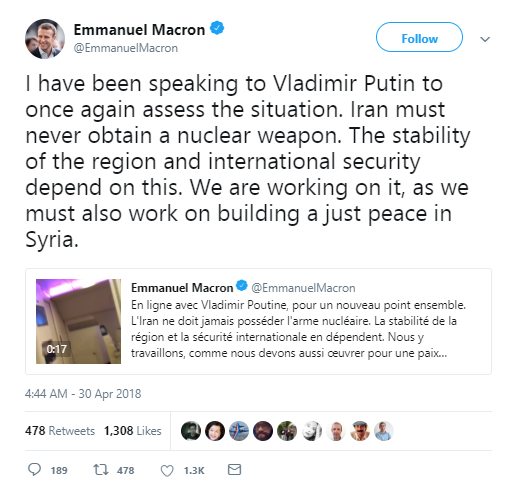 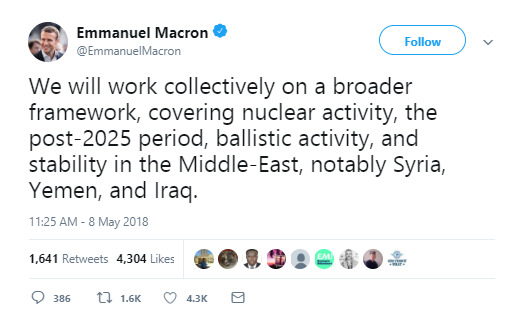 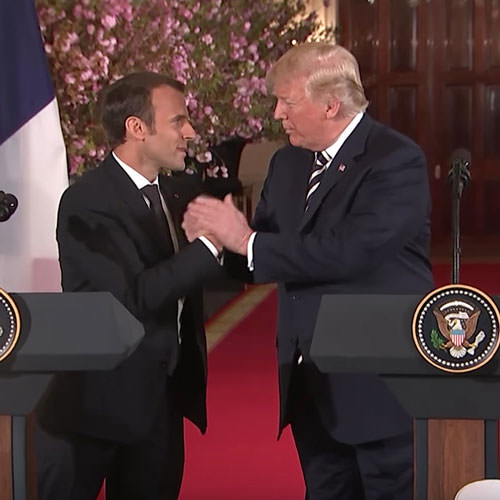