Sunday, 4 March is the date Italian citizens, national and international companies, investors and political leaders are waiting for. Italian voters will get to choose their representatives to the national parliament and, consequently, their new government, thus making this election the next big political test for anti-populist movements in the country and, consequently, in the EU.

Based on the current political scenario and the latest polls, predicting the result is not straightforward. The March election will be the first time Italians cast a ballot with the recently approved electoral law – a mix of first-past-the-post and proportional voting methods which largely favors, in its mechanism, party coalitions. Under this new and complex system, analysts find it difficult to determine with certainty how constituencies and, consequently, seats will be distributed among the various parties. This is made even more complicated given that this will be a three-way contest, with each major political grouping expected to win between a quarter and a third of the vote.

The center-right coalition brings together Silvio Berlusconi’s Forza Italia (16% of vote intentions), Matteo Salvini’s Northern League (14%) and Giorgia Meloni’s Fratelli d’Italia (below 5%). Altogether, the coalition is considered to be the principal force in terms of electorate’s support and might even be able to reach the 40% threshold that could allow it to gain the plurality of seats in parliament. In that case, the crucial question remains who will be the candidate for prime minister. While Berlusconi is no longer able to hold public office, his name will nevertheless be on the ballot. His comeback has surprised the many, but even more surprising has been the warm welcome he received from European leaders, who see him as a safe card in the upcoming elections, especially in containing Matteo Salvini’s Euroscepticism.

The center-left coalition, led by Matteo Renzi’s Democratic Party, follows with around 27% of the vote. While the pro-European party led by former Foreign Minister and EU Commissioner Emma Bonino is growing its consent (3%), the Democratic Party is continuously losing ground – probably paying the price for Renzi’s falling popularity – and is now down to 22%. The lowest point in Renzi’s political career came in December 2016, when Italian voters rejected a constitutional referendum to which he had tied his political future. He decided to resign and was replaced by his party ally Paolo Gentiloni, who has demonstrated, in the past few months, his ability to steer the country gaining Italians’ full trust. Renzi’s decision to push the party further toward the center was strongly opposed by the left wing minority, which ultimately decided to part ways, founding the party Liberi e Uguali headed by the Senate’s Chairman Pietro Grasso.

The populist 5 Star Movement, now formally led by 30-year-old MP Luigi Di Maio, has become famous for opposing any alliance with other political parties, but enjoys the strongest support of any single party with the backing of around 28% of the electorate. With anti-establishment origins, over the past few years Di Maio has guided the Movement’s progressive institutionalization, aiming to reinforce its credibility vis-à-vis national and international business and investors. Most recently, the Movement’s confidence and the foundation of its entire political platform (“honesty, honesty”) have been rattled by episodes that are casting shadows on the integrity of its members and denting the trust in its methods. Allegations that some of its politicians failed to abide by a pledge to devolve part of their salaries to a fund supporting SMBs represent only the latest case. Hacking attacks on its web platform, secret votes and a not-so-transparent process in the selection of candidates have all contributed to questioning the Movement’s posture, providing useful ammunition to its antagonists.

In this close-run election campaign, candidates are often riding the wave of current events in support of their political platform. Overall, the main themes that are subject to confrontation correspond to the most critical problems the country is facing, such as immigration and security, labor and taxation. Italian people have been promised the expulsion of 600,000 irregular migrants, the repeal of the latest labor reform (known as the Jobs Act) as well as a number of tax reductions. However, the feasibility of these promises and their financial sustainability still remain uncertain.

In a context where almost half of the Italians (47%) say to be still undecided, the main concern is that citizens disillusioned by their current political class would turn away from elections, confirming the downward trend in voter turnout toward 70%, from close to 90% 25 years ago. The risk could be heightened by the not-so-remote possibility of a second round of elections in case of indecisive results in March. This option would be far from ideal, as it would represent a worrying sign to markets and investors, but is nevertheless on the table.

The only certainty in the 4 March elections is that very little will change, especially in the short and medium term. The political class will not be substantially renovated, as demonstrated by Berlusconi’s comeback. If none of the three contenders is able to achieve a majority, a grand coalition government involving the main establishment political forces will become necessary. Under these premises, the newly elected government could struggle to have the necessary political support to implement the solid and bold agenda the country needs and the European institutions expect.

While stability will eventually be granted, what is expected to be a crucial day might not be that decisive at all. 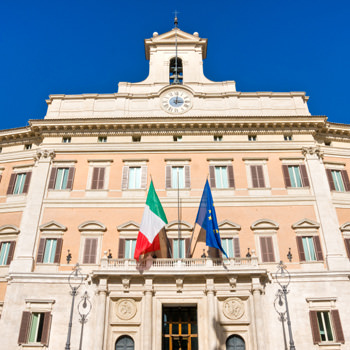