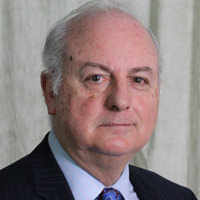 The Importance of Corporate Vision and Values

Dr. Roger Hayes is a senior counselor based in APCO Worldwide’s London office. Having served in various roles in London, Johnnesburg and Delhi for the past 13 years, he is now part-time, also teaching public and corporate diplomacy for one semester as an associate professor at LKY School of Public Policy, NUS, Singapore. He is also an adviser to the MARPE group of European Universities developing public, corporate and civic diplomacy courses under an ERASMUS program.

Dr. Hayes is a leading international public relations and public affairs professional with more than 40 years’ experience in trade associations, corporations and consultancies and has also advised governments. He is considered one of the forerunners of the international corporate affairs role, including at Ford and Thorn-EMI and in the 1970s worked for Burson-Marsteller during the early days of international expansion of the field beyond the United States and Europe.

With a Bachelor of Science in Economics from the University of London, Dr. Hayes took a mid-career sabbatical to study for a master’s in international relations at the University of Southern California. A decade ago he completed his Doctorate in Public Relations and Public Diplomacy at Henley Business School, for which he has also run executive education seminars in Africa and Asia.

In the 1980s Dr. Hayes was the founding investor and chair of the first ever PR stakeholder research company ECHO RESEARCH. He is a member emeritus and past-president of the International Public Relations Association (IPRA) and a fellow of the Chartered Institute of Public Relations (CIPR) in the UK, for which he also acted as chief examiner/diploma for three years.

His book, “Reframing the Leadership Landscape: Creating a Culture of Collaboration” (with Dr. Reginald Watts) was published by Routledge in 2015. He has also contributed a chapter on public relations and public diplomacy to the latest edition of the “Global Public Relations Handbook: Theory, Research and Practice” with a preface written by Margery Kraus.

Apart from consulting, teaching and writing/research, Dr. Hayes is a pro-bono adviser to the UN-backed charity Consortium for Street Children.