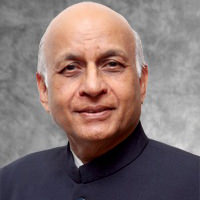 Lalit Mansingh joined the Indian Foreign Service in 1963 after placing first in the country’s civil service examinations. Ambassador Mansingh has more than 40 years of extensive international experience in Europe, Africa, Asia and the Middle East. He is a former foreign secretary, the highest diplomatic rank in India.

He served as Indian ambassador to the United States and the United Arab Emirates and as India’s high commissioner to the United Kingdom and Nigeria. He also was deputy chief of mission in the Indian embassies in Kabul, Brussels and Washington, D.C. He has dedicated his career to promoting India and its role in the global marketplace.

Ambassador Mansingh is diplomatic advisor to the Federation of Indian Chamber of Commerce and Industry (FICCI) and chairman for the FICCI India-U.S. Policy Group.

In New Delhi, Ambassador Mansingh held a variety of assignments. He served as the joint secretary in the Department of Economic Affairs of the Ministry of Finance, the director general of the Indian Council for Cultural Relations, dean of the Foreign Service Institute of India and secretary (west) in the Ministry of External Affairs.

Most recently, he has held several positions, including professor emeritus at the Foreign Service Institute of India; executive committee member for the Institute of Peace and Conflict Studies in New Delhi; member of the Governing Board of Development Alternatives; member of the India Council for Sustainable Development; and president of the World Cultural Forum, India.

Ambassador Mansingh has degrees in history and political science. He was a research scholar at the School of International Studies in New Delhi and a lecturer at the Utkal University at Bhubaneswar, Orissa.