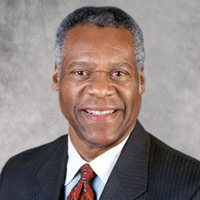 Delano E. Lewis, former U.S. ambassador to the Republic of South Africa and former president and chief executive officer of National Public Radio, has led a long and successful career in global corporate and public affairs.

Prior to his diplomatic appointment by President Clinton, Ambassador Lewis was an executive with C&P Telephone Company in Washington, D.C., a subsidiary of AT&T. He also served as president and chief executive officer of Bell Atlantic’s (now Verizon) Washington, D.C., operations.

Earlier in his career, Ambassador Lewis served in multiple roles in the federal government. He was an attorney for both the Department of Justice and the Office of Compliance in the Equal Employment Opportunity Commission; associate director of the U.S. Peace Corps in Nigeria and country director of U.S. Peace Corps in Uganda; and legislative assistant to U.S. Senator Edward W. Brooke (R-Mass.) and chief of staff for Delegate Walter Fauntroy of the District of Columbia.

He was the founder and former director for the Institute of International Relations at New Mexico State University. He serves on the boards of the Colgate Palmolive Company, the Eastman Kodak Company and the American Institutes for Research.