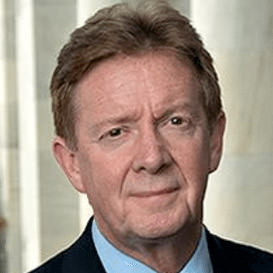 President emeritus and former president of The American University

Dr. Cornelius M. Kerwin, member of APCO’s International Advisory Council, served as American University’s 14th president from September 2007 to May 2017. The Board of Trustees voted unanimously to appoint him president emeritus, effective June 1, 2017.

A nationally recognized specialist in public policy and the regulatory process, Dr. Kerwin is actively engaged in research and periodically teaches courses in administrative process, policy implementation and American government. He founded AU’s Center for the Study of Rulemaking and is the author of Rulemaking: How Government Agencies Write Law and Make Policy.

Dr. Kerwin served as a member of the board of directors of the American Council on Education (ACE) from 2012 to 2015 and on the board of the National Association of Independent Colleges and Universities (NAICU) from 2012 to 2014. He is a member of the Executive Committee of the Greater Washington Board of Trade and a member of the DC Chamber of Commerce and the DC Government’s Economic Strategy Advisory Committee. From 2013 to 2015, Dr. Kerwin chaired the Consortium of Universities of the Washington Metropolitan Area Board of Trustees and the Patriot League Council of Presidents. He is currently a senior fellow with the Institutional Resources program of the Association of Governing Boards.