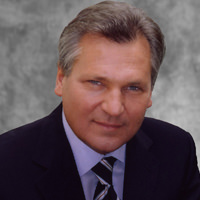 Aleksander Kwasniewski is the former president of Poland. During his 10 years in office, President Kwasniewski navigated Poland through the delicate transition from communism. He successfully led the adoption of a new national constitution and the campaign committed to Poland’s admission to NATO and the European Union. Before becoming president in 1995, he played an important role as a negotiator in the Round Table Agreement in 1989, which led to a peaceful transfer of power and cleared the way for a democratic Poland.

President Kwasniewski also advocated regional cooperation in Central and Eastern Europe. He pushed for Lithuania, Latvia and Estonia to be admitted to the EU and was a mediator in the resolution of the Orange Revolution in Ukraine.

Since completing his second presidential term in December 2005, President Kwasniewski has lectured around the world. He serves as a visiting faculty member at Georgetown University in Washington, D.C., teaching in the Edmund A. Walsh School of Foreign Service, where he was appointed a Distinguished Scholar in the Practice of Global Leadership. He is also a member of the board of trustees of the International Crisis Group; member of the president’s International Advisory Board of The Atlantic Council of the United States; member of the Bilderberg Group; chair of the supervisory board of the International Centre for Policy Studies in Kiev; chairman of the European Council on Tolerance and Reconciliation; chair of the board of Yalta European Strategy; and chief of the board of his presidential foundation, Amicus Europae.