While Pride month is well-known and celebrated, LGBTQIA History Month gives us a chance to learn, reflect and act on creating better histories moving forward. We cannot fully tell the next chapter of our collective history if we don’t share how the historic struggles of queer people in America have made us a stronger nation.  We owe it to our elders—and the next generation—to keep our stories alive so that together we can create progress.

“All of us who are openly gay are living and writing the history of our movement. We are no more—and no less—heroic than the suffragists and abolitionists of the 19th century, and the labor organizers, Freedom Riders, Stonewall demonstrators, and environmentalists of the 20th century. We are ordinary people, living our lives, and trying as civil rights activist Dorothy Cotton said, to ‘fix what ain’t right’ in our society.”—Senator Tammy Baldwin

To mark this month, we asked several of our LGBTQIA ERG members to share why our history matters to them and recommended a book that tells a part of our history.

Diego de Leon (he/him): Just like LGBTQIA history is human history, humanities’ challenges are also LGBTQ+ challenges. As the number of extreme weather events increase in intensity and frequency, so does the level of vulnerability of historically marginalized communities, including the gender and sexually diverse populations, especially when you add factors such as economic status and ethnic diversity. Nonetheless, far from becoming an impediment, queer scientists and activists have always been at the forefront of the environmental movement, sometimes sadly forced to conceal their sexual orientation or gender identity due to the fear that their contributions might be overshadowed by social prejudice. Such is the case of one of the mothers of the environmentalist movement, Rachel Carson. Yet, even if it’s after their lifetime, we must treasure their contributions and continue building on their work for a healthier planet.

Another example comes from the recent increase and, more importantly, the fast decline of infection caused by monkeypox. With the memory of the U.S. HIV-AIDS pandemic devastation in the 80s fresh in the minds of the LGBTQIA population, we were quick to act and bend the curve of the infection rates downward in just a couple of months. This was archived thanks to the consolidated health network and elevated level of consciousness within our community. In  turn, this prevented the illness from becoming bigger public health threat, demonstrating once again the level of care and organization of our population, and the importance of learning and understanding queer history.

My book recommendation is “Shortest Way Home” by Pete Buttigieg, an inspiring story on being gay in the rust belt and how things do get better.

Tristan Fitzpatrick (he/him): This LGBTQIA History Month matters to me more than ever as we are witnessing an unprecedented assault at the state and local level on LGBTQIA people. From banning books, to preventing teachers from discussing LGBTQIA topics in public schools, outside forces are threatening our fundamental rights in a vicious backlash to our pride and forward momentum.

One book I recommend is “How to Survive a Plague: The Inside Story of How Citizens and Science Tamed AIDS” by David France. The book dives into the ins-and-outs of a pivotal moment in time for our community—as one thing many non-LGBTQIA people don’t realize the extent to which the AIDS crisis impacted our community. The crisis spurred the fight for marriage equality, as gay men often couldn’t visit their ill partners in the hospital because they weren’t legally married, and were often denied disability and medical benefits as well. It also paved the way for more LGBTQIA organizing, as traditional power structures like the government failed in their response to the crisis, forcing our community to rise and take care of each other.

Now, as we seek to navigate the COVID pandemic—which has had a similar, disproportionate impact on minority communities—we must heed the call of our history and ensure all communities have a chance to write the next chapter of their lives with grace and understanding.

Howard Pulchin (he/him):  There was no such thing as gay history when I was growing up. While we may have heard mentions of the Stonewall Riots, we were presented with hurtful stereotypes instead of the significant stories, fights and isolation that queer people experienced. The ability to learn about our history would have opened avenues of acceptance for me and made my coming out easier and earlier. When one’s history is ignored, they feel ignored and unwelcomed. That is why I want to learn more about the history of our community—so that we pave an easier path for all of us to fully take part in the future history of America.

My recommended book for this month is “The Deviant’s War: by Eric Cervini. It tells the story of Frank Kameny, a brilliant man trying to serve his country but was denied employment despite his qualifications due to being gay. It displays the lesson that discrimination of some hurts the potential of all.

Mina Rodriguez (they/them): LGBTQ+ history matters to me because it’s important to know where we’ve been as a community in order to see where we are and where we want to be.

Even on the most discouraging days, I look to our history and know that while our struggle for equality has been long and tiresome, we have come a long way to be able to love who we love. Everyday, I remind myself that I pay homage to the countless Black and brown trans women at stonewall and those who came afterward by living in my truth every day and actively fighting towards equality. In short, knowing our history gives me power, motivation, strength and a compass to understand where we’ve been and understand that we’ll never go back there again.

I recently ordered “Queer: A Graphic History.” As the title suggests, it’s a non-fiction graphic novel written and designed by two queer people that dives into queer theory and history.

Olivia Taylor (she/her): One of my first experiences reading something that centered around a queer character was “Fun Home: A Family Tragicomic” by Alison Bechdel. Alison Bechdel is a cartoonist who is known for the comic strip “Dykes to Watch Out For”– which originated the Bechdel Test. I think Bechdel is an important person to celebrate for LGBTQIA History Month as she doesn’t always receive notoriety deserved given all her accomplishments.

This book is her graphic memoir, released in 2006, and was ultimately adapted into a musical and went on to win a Tony Award. Bechdel and I both live in Vermont, and she has been incredibly involved in the local queer community. This book addresses not only her struggles with coming out, but also her troubled childhood and relationships with her parents. It was one of the first pieces of media by a queer author about a queer experience, that I saw succeed on such a large scale. 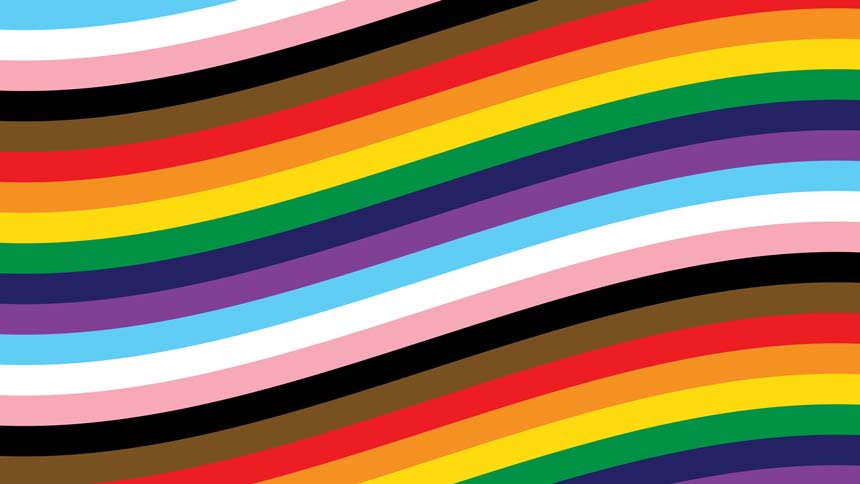