Yesterday, the election results showed that Angela Merkel will remain German Chancellor, and her conservatives will lead the new government which has yet to be formed. During the Federal Election, 46.1 million German citizens (75% of eligible voters) have cast their vote. The results bring about several novelties that are worth noting, and we have summarized the main take-aways below. While it will take some time until we know how the new German Government will look like and what the short- and long-run priorities are, we already do know that there are going to be more MPs in the Bundestag than ever before.

With 33% of the votes, Angela Merkel’s conservatives defended their position as the strongest faction in Parliament. The alliance of the Christian Democratic Party (CDU) and the Christian Social Union in Bavaria (CSU) will occupy 246 of the 709 parliamentary seats. Compared to the last federal elections, the sister parties have lost a total of 8.6 percentage points and thus obtained the lowest result since the elections in 1949.

Merkel’s opponent Martin Schulz and his Social Democratic Party (SPD) came in second with 20.5% of the votes. This is also significant, as the SPD has not only lost 5.2 percentage points since the last elections, but also suffers her lowest result in modern history. The Social Democrats take 153 of the 709 seats.

Thus, the current ‘Grand Coalition’ has seen devastating results – both the Conservatives and the Social Democrats have lost a considerable number of votes to the smaller parties.

The right-wing Alternative for Germany (AfD) came in third and obtained 12.6% of the votes. It will enter the Bundestag for the first time since its founding in 2013 and take 94 seats. The Liberal Party (FDP) obtained 10.7% (80 seats) and will re-enter the Parliament. In 2013, the FDP failed to meet the 5% hurdle and had to leave the Bundestag for the first time in her history. The Left Party obtained 9.2% and 69 seats in the Parliament. And, finally, the Greens occupy 67 seats following their electoral result of 8.9%.

However, following the announcement of the first electoral outcome last night, the SPD has immediately retreated from any government option, announcing that they will take on the role as the leading opposition party in Parliament. Although Merkel has carefully reminded the Social Democrats to at least consider entering coalition talks, we currently deem the Jamaica Coalition the only feasible option. This constellation will be a novelty. While a Jamaica coalition has been tested on the federal state level (currently governing Schleswig-Holstein), it has never been formed on the federal level. The reason for this is that the Greens and the Liberals are usually finding it rather difficult to overcome their differences, especially around climate, tax, and transport policy.

As a Jamaica Coalition is the only option on the table (apart from the unlikely case of Merkel’s conservatives forming a minority government), the ultimate next steps are exploratory talks within and between the parties concerned. Internally, the parties must align with their members; externally, they should find common grounds with the coalition partners. After the four partners in question (CDU, CSU, FDP, Greens) have opted in favor of a Jamaica Coalition, they initiate coalition talks, which then eventually result in a coalition agreement. Once the agreement is finalized, the Bundestag will vote for the Chancellor, who will then, in turn, swear in the ministers.

In 2009, the coalition talks between CDU/CSU and FDP took 31 days to complete. In 2013, it took 86 days until the Grand Coalition Government was up and running.

Last night, the five parties currently represented in the Bundestag have announced to elect their new faction leaderships already on Tuesday (tomorrow). SPD head Martin Schulz stated that he will not run as faction chairman, so there is speculation about whether he is planning to take on any role in the parliamentary faction at all. 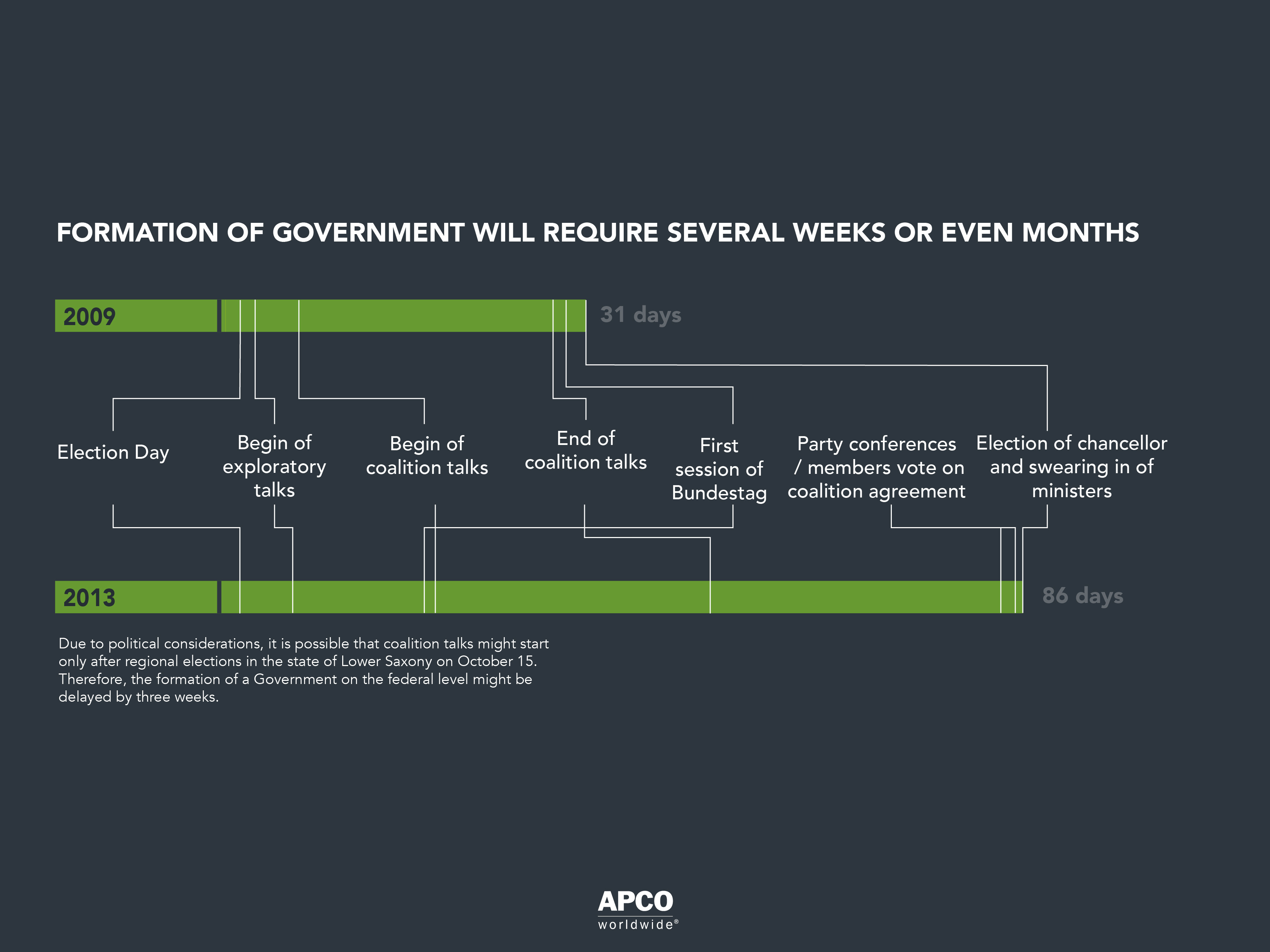 Five Things to Take Away