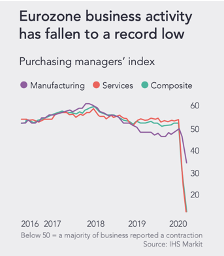 Germany assumes the Presidency of the Council of the European Union on July 1, 2020 with economic activity in the Eurozone in free fall (see table). Chancellor Merkel announced a refocusing of the Presidency on overcoming the COVID-19 crisis and – with French President Emmanuel Macron – created a remarkable and transformative plan for a European stimulus package to lead to a swift recovery across the Union.

COVID-19 requires a “Corona Presidency,” and Germany has put her tenure under the motto “Together for Europe’s recovery.” Pressing issues, including the Multiannual Financial Framework (MFF), the Green Deal, Europe’s sluggish digital transformation, and geopolitical and geopolitical stability, however, are still on the agenda. In order to succeed, Merkel will need to turn the crisis into a catalyst. But with political cleavages exacerbated; social dynamics accelerated; and economic policy in unchartered territory, it remains to be seen whether Europe’s semi-hegemon will successfully work through this.

The Council of the European Union is the institution where national ministers meet to discuss, amend and adopt regulations; with the European Parliament, it is the EU’s main decision-making body. Documents show that the outgoing Croatian Presidency was hit hard by the crisis. Like many institutions, EU bodies struggled to adapt to physical distancing and working in the virtual space.

In a recent webinar, Germany’s Permanent Representative to the EU Ambassador Michael Clauss, carefully managed expectations by warning that the capacity of the Presidency‘s meetings will only be a thirty percent compared with pre-crisis levels, and that Germany is weary about virtual meetings as these are seen only twenty percent effective. Clauss, however, continued to lay out three phases of the Presidency, which sketch out the next few months:

Germany, Portugal and Slovenia, the so-called Trio Presidency, have also published their joint objectives, very much in line with Ambassador Clauss’ agenda and overcoming the crisis at its core, and civil rights, economic development, the Green Deal and foreign policy also prominently mentioned.

But COVID-19 creates economic pressures in the EU that are asymmetrical, uneven and devastating. Responses by member states have been equally uneven, with Germany an outlier in the fiscal volume of its economic recovery effort. Even before the crisis, the German Presidency was considered critical because of the divisive challenges the EU is facing. With overcoming the economic and social consequences of the crisis top of the agenda, all other issues will be framed in light of this response. Stakeholders need to demonstrate that they are actively and positively participating in the public and political response and highlight that their concerns are crucial for a prosperous and healthy EU in the future. More than ever, corporations and other organizations will be judged by their actions. Those with strong environmental, social and governance (ESG) management in place have a clear advantage. Others will struggle; many will fail.

The current situation does not have a playbook. Uncertainty rules. We expect a dynamic yet struggling German Presidency of the European Council. COVID-19 proves our vulnerability, and Germany wants to do her part to create more protection and safety.

APCO’s Europe experts are sharing a bi-weekly newsletter on the activities and actions of the German Presidency. Subscribe here. 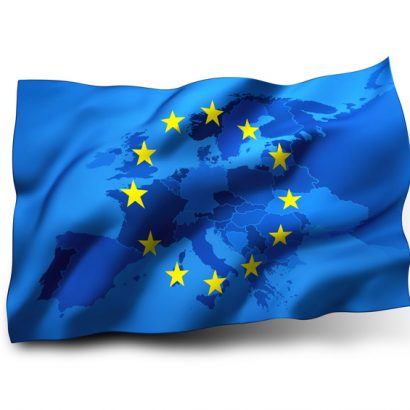