Ask the majority of communications professionals which industry sector has had the biggest issues figuring out what it can and can’t share on social media, and healthcare will likely be top of the pile.

In many countries, what pharmaceutical companies, in particular, are unable to communicate publicly is heavily regulated, and the UK is one of the more stringent markets.

The Association of the British Pharmaceutical Industry (ABPI) is foremost in the minds of UK communicators in the sector given its Code of Practice, which governs much of the decision-making that has to be made around social media content.

So it was intriguing to hear at the ABPI’s social and digital media day last Friday in London that in the past two to three years, many healthcare companies have begun to find valuable and viable ways to engage audiences using social media, with a shrewd approach to content that ensures compliance. The progress in that regard, in a relatively short space of time, has been marked.

Challenges remain though, which I covered in a short talk about the social media implications of crisis and issues management in the health sector. Like most sectors, healthcare continues to face challenges in making social media an integrated, or central, aspect of the approach to crisis preparedness and management, and likewise with the approach to managing issues.

Which is why I shared these points on the fundamentals of how social media activity should be approached, from a crisis perspective:

They may seem pretty obvious, and they may all apply equally across all forms of media, but regulation and convention in healthcare can make agility particularly challenging. If the conversation on Friday is anything to go by though, that is changing rapidly as the sector adapts and aligns.

I ended with a point that was hammered home in Brand Anarchy, which I co-wrote several years ago but stands firm today: social media can be daunting, but engagement is a necessity, not an option. Much has changed since then, but the clever approach the healthcare sector has begun to adopt, and the informed choices it is now making, may see it lead by example for other sectors in the future.

Thanks again to the ABPI for a well-run, inspirational and informative day. 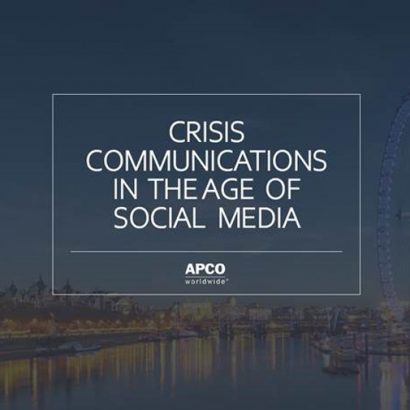